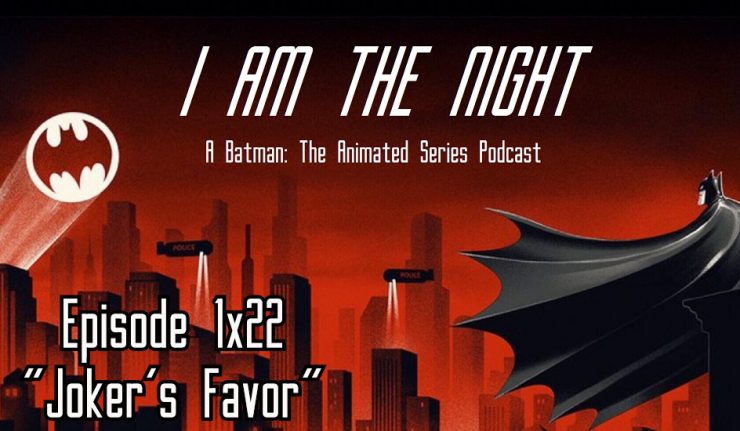 Welcome to another episode of I AM THE NIGHT, a podcast dedicated to breaking down every episode of Batman: The Animated Series. Each week, the wonderful Steve J Ray (reviewer at DC Comics News, as well as Editor-in-Chief of our sister site Dark Knight News) and a guest will sit down and dive cowl first into an episode of the greatest animated series of all time.

In this episode, Steve is joined by fellow DCN and DKN writer, and his son, Adam Ray to talk about the 22nd episode of season one of Batman: TAS, entitled “Joker’s Favor”. So sit back, put on your cape and cowl, and prepare yourself for a journey into the darkness!

Episode Synopsis: After a man named Charlie Collins curses at the Joker on the road for offensive driving, the Clown Prince of Crime corners him and intimidates him into doing him a “small favor”. Two years pass, and the Joker finally decides how to use Charlie: to sneak a bomb into the Peregrinator’s Club, where Commissioner Gordon is to give a speech at an award ceremony. Charlie, who merely has to open the door, is skeptical at first, but for the sake of his family, he reluctantly decides to obey. We also me the now infamous Harley Quinn for the very first time!

Listen to our review of “Joker’s Favor” right here!

“I Am The Night” Theme by David B. (www.twitter.com/DavidBMusic21)

Be sure to subscribe on Apple Podcast, Spotify, Stitcher, or Google Play, and if you like what you hear, please give us a 5-star rating and review!