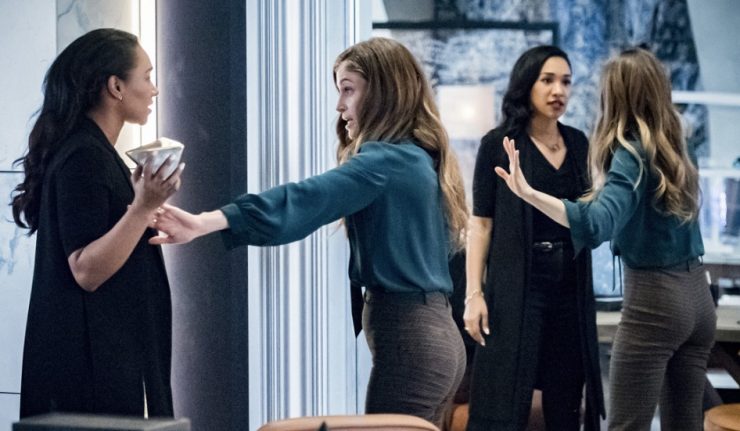 Barry and Cecile investigate the odd behavior of Iris running on Barry’s theory that it is an impostor; Iris gets wise to Eva while her plan of escape incorporates the talents of Bloodwork; Cisco and Ralph help a strangely-comatose Caitlin.

After weeks and weeks of fans screaming at their smart phones or TV’s, The Flash 6×17 delivers some satisfaction.

The writing is extremely strong and direct in how both injured parties and impostors are handled. Candice Patton is given great material as both the real Iris and Mirror-Iris, the latter given depth. It makes sense that after weeks of life, Mirror Iris would start to develop her own sense of individuality unlike her younger “siblings.” This is subtly pointed out through Cecile’s and Bloodwork’s opinions of her. More on Ramsey later.

We also see that these living reflections can go T-1000 with their limbs through her brawl with Barry. Further, they can interact with mirror surfaces much like Mama Eva and Mirror Master before her. Mirror Iris is at her most vile during the fight with her emotional manipulation of Barry rather than her sharp edges. However, Barry doesn’t need his speed to win; it’s clever how he turns the tables by speaking to her need to be more than just a copy of his wife. This maneuver also shows viewers how truly ruthless Eva can be with her creations; she destroys Mirror Iris without a second thought, much like how Mirror-Kamilla kills herself earlier for her will.

Grant is given great scenes this week as Barry finally applies what he’s learned about Mirror Iris as a CSI. What makes this journey to the truth so appropriately frustrating is that his actions can be seen as those of a husband desperate to reconnect with his estranged wife. Including Cecile was the first decent use of that character all season in this reviewer’s opinion. Her metahuman empathic ability provides insight to both parties and helps her giving Barry the leg up he needs. Great shock factor when the bogus device reveals Barry himself to be a mirror reflection; it leaves fans to actually consider that before flashbacks show Eva’s full range of powers. The aforementioned fight with Iris is truly gruesome as a depleted Flash is at the mercy of this reflection. Barry has Flash Time, but he can’t move fast enough to evade being stabbed. The final scene between Barry and the real Iris has that great star-crossed lovers feel as they try to assure each other, albeit in vain, of their commitment to finding each other again. Both visually and dramatically the scene just works.

Eva McCulloch finally gains her freedom. Efrat Dor shows her full range of dramatics as much as her character does her abilities. This week viewers are actually given insight as to how invasive this character can be. She is nearly maternal with Mirror Iris, a despondent prisoner to Iris, full-blown manic when Iris pushes her buttons, and finally ruthless with both Mirror-Iris’s destruction and leaving Iris, Singh and Camilla as hostages to keep Barry in check. From learning of Barry’s plot to expose Mirror Iris to revealing she’d been targeting Iris all along, this new Mirror Master conveys a threat level that surpasses Sam Scudder. How can one keep a secret from a villain that can access your most private places, even a reflective tray? She is the perfect equal to her husband in that she has eyes and ears everywhere.

Bloodwork is seen for the first time since pre-Crisis. Sendhil Ramamurthy has not missed a step as a self-convinced Messiah with cancerous blood. The writing team cleverly has him willing to play “the long game,” as he calls it. That’s smart in having him be involved in Eva’s scheme, yet not a physical part of it. He has a chance to escape, but demonstrates a streak of patience and cunning. This works brilliantly against the cliche of a supervillain breaking loose in spite of a heavily-fortified prison.

I really can’t see anything wrong with this episode this week except the question of how Ramsey Rosso’s blood could affect the mirror enough for Eva to gain her freedom? I hope that is explained down the road.

Although we didn’t see the reunion between Barry and Iris, the cliffhanger was perfectly timed and written. All performers were on point, nothing felt forced, and they even brought Bloodwork back when it felt short-changed. I sincerely hope that they do reunite before the end of this shortened season. Mirror Master II feels like a legitimate threat more so than Black Hole. See you guys next week when Godspeed makes his return and a depleted Flash is forced into round two!