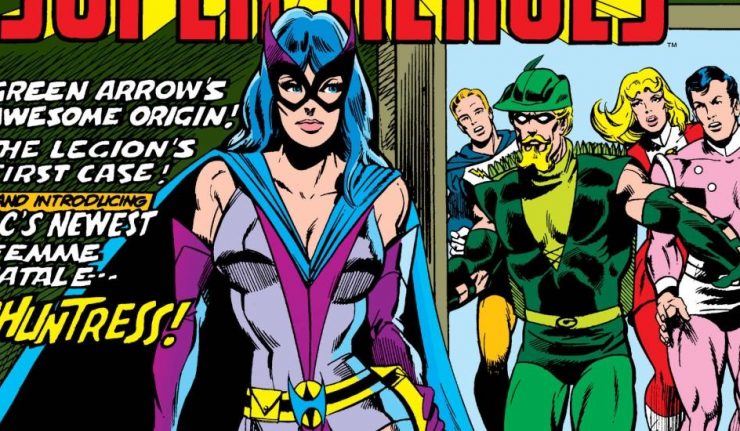 DC Super-Stars #17 (Facsimile Edition): This 1977 issue features the debut of Huntress, the untold origin of Green Arrow, and an early adventure of the Legion of Super-Heroes! Offered to coincide with the Catwoman 80th Anniversary 100-Page Super Spectacular #1.

Back when I was a kid in the seventies, DC had a number of anthology titles that might seem strange to today’s readers. And DC Super-Stars was one example. It didn’t have a regular feature, the stories and characters would change from issue to issue, although many issues would have multiple stories centred around a common theme. Sometimes the stories were original, but DC Super-Stars often featured reprint stories.

The theme for DC Super-Stars #17 was emblazoned on the cover as “Secret Origins of Super-Heroes” and featured three separate stories, all of which were newly created for that issue rather than the usual reprint stories.

In those days, while origin stories might provide extra details or tell the story from a new viewpoint, it wasn’t common to alter the essence of a previously established origin story. It was rare to see an origin story that made any major retcons in a character’s genesis.

DC Super-Stars presents three different approaches to approach an origin story, yet still make it interesting. First, there is the origin story of Green Arrow, which is essentially the same Silver/Bronze age story readers were more familiar with, but delivered in a more detailed fashion, narrated by the character himself. Denny O’Neil and Mike Grell fleshed out the story, without making any major revisions, opting instead to flesh the story out, making it a more immersive experience.

However, Jack C. Harris takes a different approach with the Legion of Super-Heroes. His story technically includes the Legion’s origin, but only briefly as he uses their origin as a launching point for the story of the group’s first adventure. Thus, Harris tells an entirely new, but previously untold tale spinning out of the Legion’s origin.

I like that Harris places his tale within a bookend story set in what was then the present time in the Superboy and the Legion Of Super-Heroes title. This kept the story from being limited to involving the three founding members in their original Silver Age costumes. This allowed for a juxtaposition of the Bronze and Silver Age versions of the characters.

Paul Levitz’s Huntress origin story for the Huntress gave him the maximum amount of freedom with the story. DC Super-Stars #17 was the characters very first appearance, plus the story took place on an alternate Earth, so Huntress was a completely blank slate.

Not only that, but Levitz introduced an important addition to the history of DC’s original Batman. Levitz established that Batman and Catwoman eventually married and had a daughter, Helena. I found it quite fascinating to see an alternate version of the wedding that fans were expecting in Tom King’s Batman #50.

It seems likely that there is a reason that DC chose this issue for the Facsimile Edition treatment. Tom King has hinted at on his Twitter feed about his upcoming story “Helena” in the Catwoman 80th Anniversary special. King has implied that this story will reveal that Selina is pregnant with Bruce’s daughter. A new Helena Wayne could be about to make her debut in the DCU.

One of the things I love most about these facsimile editions is the inclusion of the original ads. DC Super-Stars #17 came out the summer I was eight, so the ads give me a rush of nostalgia. I love the in-house ads, advertising DC books that I either, owned, borrowed, or longed for as a kid. But I also love the ads for all the toys, games, and junk food that advertisers were marketing to my age group.

And yes, this issue includes that staple of seventies comics, a Hostess ad. Be sure to pick up this book so you can marvel at Wonder Woman defeating a giantess using the irresistible power of Hostess Twinkies.

It wouldn’t really be fair to judge these stories by modern standards. Today’s comics are aimed at an older demographic, leading to a deeper complexity of storytelling. However, even if I did, this particular selection of stories would actually hold up fairly well despite their age.

This book is a nice walk down memory lane for long-time DC fans such as myself, but it also offers an interesting look at a bit of classic DC history for younger readers. And it features writing and art from some the biggest names in comics during the seventies. Whether you’ve read this comic in its original form or it’s brand new to you, it is well worth the read for DC fans of any age.