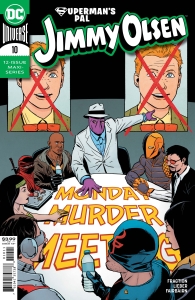 Superman’s Pal Jimmy Olsen #10: Jimmy continues his world tour, risking his life for more of your sweet retweets, likes, and faves! Plus, the mastermind behind Jimmy’s assassination is revealed… and the insidious secret he’s willing to kill for will upend everything everywhere forever, assuming by “everything” you mean “everything in the pages of just this comic”.

Superman’s Pal Jimmy Olsen is a very weird title. But is it a good weird or a bad weird? To be honest, I read the first issue when it came out and couldn’t really get into it. It was just too strange and the humour didn’t seem strong enough to justify the strangeness.

However, when I took on the task to read Superman’s Pal Jimmy Olsen #10, I went back and read the entire series up to this point. By the way, if you plan to do the same, I recommend you also read the prologue story included in the Leviathan Rising special first.

As I read through the series, I started to get the humour a lot better. There’s a fair bit of self-referential humour, making fun of DC properties, especially a lot of DC’s Silver and Bronze age tropes. In fact, this series reminds me a lot of Keith Giffen’s Ambush Bug miniseries from the 80s. 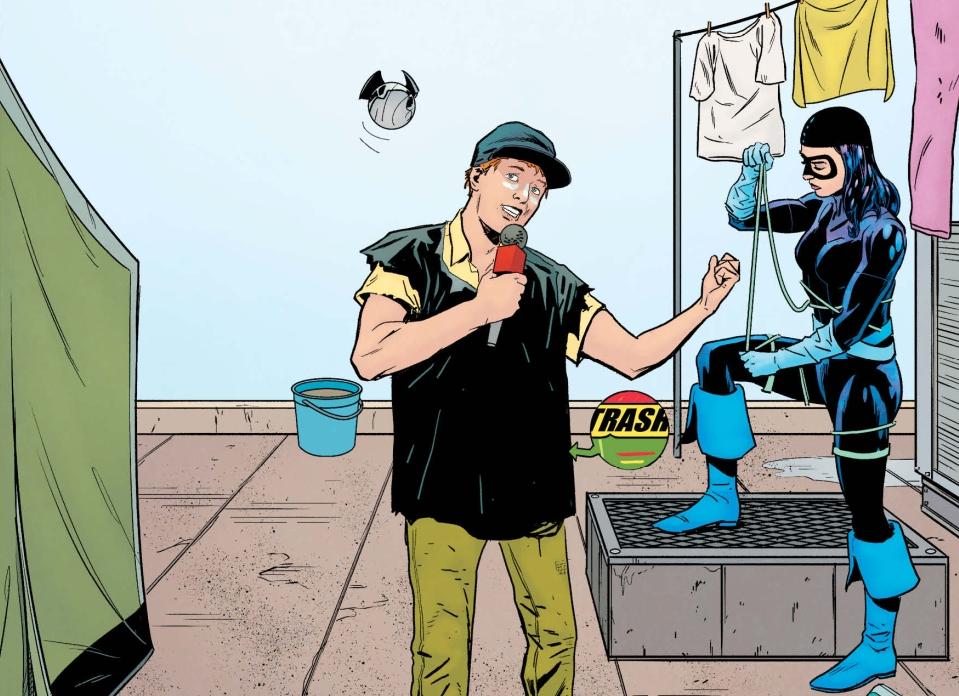 I love the Silver Age style introductory captions at the beginning of nearly every scene, with some variation on the series’ title: “Jimmy Olsen’s Brother Julian Olsen”, “Superman’s Wedding Photographer Jimmy Olsen”, Superman’s Wife Lois Lane”, etc. And I love the references to the bizarre transformations that Jimmy has undergone over the years: whether it be a Giant Turtle or Elastic Lad.

The story itself seemed rather disjointed at the beginning. It wasn’t clear when scenes took place relative to each other. And they often seemed to be telling unrelated stories. But by Superman’s Pal Jimmy Olsen #10, the overall story is starting to coalesce, and the connections between is becoming clearer. It turns out that Matt Fraction is telling a coherent story and not just relating a series of random happenings in the life of Jimmy Olsen.

I could appreciate this story as an off-the-wall sendup of the sillier side of Superman comics, but it clearly can’t be in continuity. Several characters act differently than they’ve previously done so. Batman is a good example of this. And there are deliberate contradictions with other current comics. For example, how has Dex-Starr been on Earth with Jimmy and on the other end of the DC Universe in Justice League Odyssey at the same time?

But this series spins out of the Leviathan Rising special, which is in continuity. So, Superman’s Pal Jimmy Olsen should be as well. The Flash #750 has established that the timeline is messed up, with contradictory events co-existing. However, I still can’t quite bring myself to accept the events of this series at face value. Perhaps some version of these events may be in canon, and this series is actually Ambush Bug’s unique interpretation of those events.

Even though I can’t quite accept that this story as canon, it still is quite enjoyable. I can see that some readers might not like this series if they don’t appreciate this specific wavelength of humour. However, if you do have a warped sense of humour like I do, you will think it’s freakin’ hilarious.