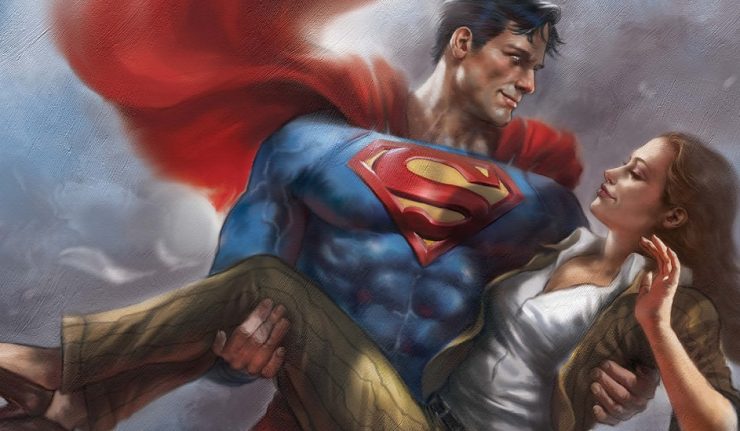 It’s slowdown time as Conner and Clark try to figure out who Conner is, where he’s from and why his memories don’t match up with Clark’s.  But, who does remember Conner?  Plus, where is Leone from?  There’s perhaps an otherwordly explanation….

This is the best issue of Action Comics in a very long time.  Instantly, it’s noticeable that John Romita, Jr. has apparently almost fully recovered from his stroke.  While he’s not suddenly become John Romita, Sr., his work on Action Comics #1022 is light years improved over the entire “Doom” story line.  It’s possible that inker Danny Miki is the difference maker here.  However, regular inker Klaus Janson did work on Romita, Jr.’s pencils on Superman: Year One and the art in that title looks very different than the “Doom” storyline which ran in the previous 6 issues of Action Comics.

From a story perspective, it’s very easy to see that issues #1007-#1021 are skipabable.  Bendis finally gets back on track with the Invisible Mafia and presents some genuinely interesting ideas.  One has to wonder, if he had this in mind all along, why waste the readers’ time on all that other stuff that was just going sideways.  The revelation of Leone as the owner of the Daily Planet was not that interesting.  However, in this issue we learn that Leone MAY have a multiversal connection.  This actually does tie in nicely with Action Comics #1006, specifically the last page and the car from the cover of Action Comics #1 being owned by Leone.  So, who is Leone, really?  Hopefully, it won’t take Bendis another 16 issues to return to this plot line.

Next up is the investigation into Conner Kent by Superman and a team of the best minds in the DC Universe, Will Magnus, Mr. Terrific, Ray Palmer, Ryan Choi, Ted Kord and of course, Batman.  It seems Conner isn’t really sure where he’s from, and Clark doesn’t remember him.  However, Ma and Pa Kent do!  Both of these plot lines are interesting from both a character perspective and mystery/intrigue angle.

It’s a bit of a surprise for Bendis to bring so many positives to an issue of Action Comics. however, Bendis’s storytelling style is certainly in question.  The Invisible Mafia has been the most interesting aspect of Bendis’s tenure on the Superman books, and two years into it that hasn’t changed.  Perhaps, it’s the frustration over the poor quality of Bendis’s stories.  For the most part, Bendis’s run has been bad.  He’s had few interesting ideas mired in terrible execution.  It’s obvious he’s trying to be clever in an attempt to tie in multiple plot lines into a cohesive whole.  It’s just not working.  It’s taken too long to come back to the Invisible Mafia.  If I weren’t reviewing this book, I would not still be reading it.  It’s really too little too late, though for Bendis on Superman.  He’s introduced too many lackluster and tedious ideas for a return to the Invisible Mafia to save him.

Surprisingly, just when it seemed Bendis and Romita were going to run Action Comics straight into the ground, the pair with apparently a lot of help from Danny Miki right the ship mostly in Action Comics #1022.  Even if one has to suffer through the terrible status quo changes wrought by Bendis on the Super-family, the actual content is a huge step up from the “Doom” arc.  Danny Miki is the star of the art as his inks on Romita, Jr. breathe new life into the look of the book.  And, Bendis finally has something interesting to say about the Invisible Mafia for the first time in nearly two years.  Two years!  In the long run, it’s too little too late, but perhaps he can at least finish his first story arc..finally?