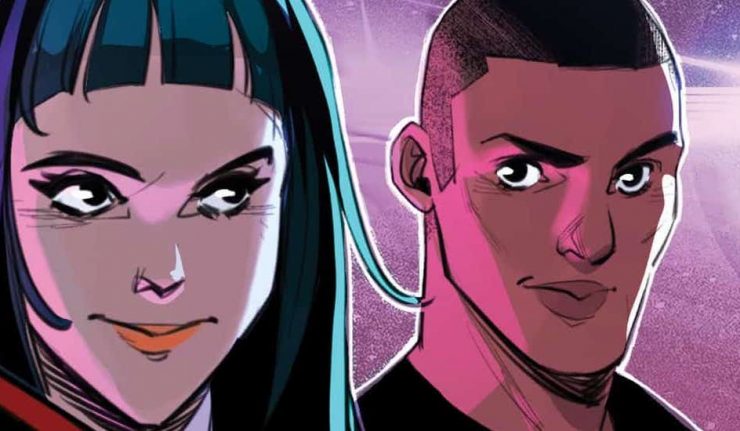 The origin of the Omega Rangers concludes in this final issue of Go Go Power Rangers. Jason, Trini and Zack meet Kiya for the first time on Safehaven to begin their new roles as Omega Rangers! Meanwhile, what will it take for Aisha, Rocky and Adam to prove they’re ready to be the newest Power Rangers on Earth?

The interior art is great. It conveys a lot of energy and it looks cool. It’s a dynamic book with a lot of style and emotion behind it.

I love the confrontation between Tommy and Jason. The most compelling aspect of this current story has been the resentment Tommy, Kimberly and Billy feel towards Jason, Zack and Trini. Obviously, this is before the revelation of the lies. But Tommy feels abandoned and he’s not given a good reason for it. He didn’t ask to be the leader; he has to stay and deal with the consequences of Jason’s decisions.

And that leads into the resentment between Tommy, Kimberly and Billy and Rocky, Adam and Aisha. It’s not intentional or mean-spirited but it is there. The new Rangers can never really replace the ones that came before. That works in a dramatic way for the story and in a meta way. The original six Rangers had a unique chemistry that the show was never able to replicate. I like that the new team aren’t instantly best friends.

I don’t love the cover. It’s well drawn but it’s bland. The cover just depicts the three Omega Rangers standing there. It’s disappointing since this is the final issue of the series and it focuses on the team being split in two. I think the cover should have showcased the divide between the original team.

Ultimately, I feel that this series has been wasted since Shattered Grid. When it first launched, it was fun and character focused. It had a unique tone compared to the main book. But since Parrott took over both, Go Go Power Rangers has felt like a lore book. There’s nothing in this that gives any insight into the characters or plot that I didn’t get from the main book. I don’t think this needs to exist. And the fact that the series is just ending now is disappointing. There’s potential in having a second Power Rangers book and I don’t like how it was handled after the initial story because that initial story was so great.

As I’ve said in previous reviews, it would have been more effective to turn this book into one for the Omega Rangers and focus the Mighty Morphin book on the new version of the team. But that book ends up feeling cluttered and this one feels empty.

I don’t love this issue. There are some thing I enjoyed; the scene between Tommy and Jason is a stand out. Some of the character nuances are interesting but better explored in another book. The art is great but it doesn’t make enough of a difference. It’s a disappointing end to an ultimately disappointing series.