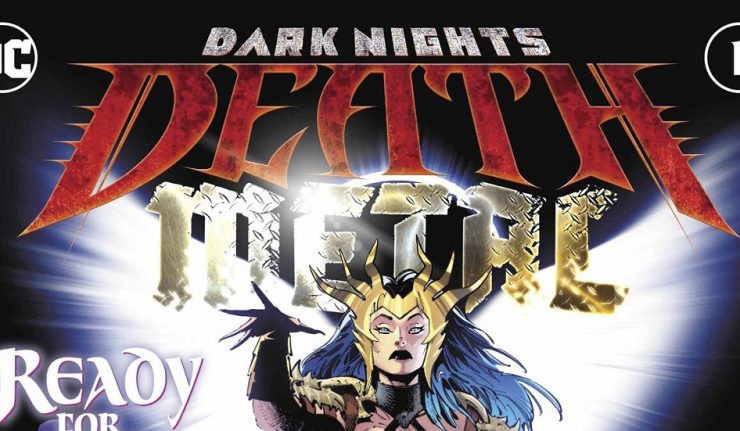 Get ready for the earth-shattering encore! The legendary team behind Dark Nights: Metal and Batman: Last Knight on Earth take center stage and reunite for one last tour.
When the Earth is enveloped by the Dark Multiverse, the Justice League is at the mercy of the Batman Who Laughs. Humanity struggles to survive in a hellish landscape twisted beyond recognition, while Batman, Wonder Woman, and Superman have all been separated and fight to survive. Unleash the beast and let the head banging begin!

Scott Snyder plunges us into an apocalyptic playground!  And what better a tour guide to begin than Sgt. Rock (doing his best as Rod Serling/Twilight Zone….”picture this…”).  Again, the DC Universe in this multiverse blending has brought back characters that are adding more and more depth to the story telling.

Snyder and Greg Capulo provide a map to the DC Universe in the opening page where there are five regions.  Pretty ominous, but recognizable of what has occurred due to Perpetua and The Batman Who Laughs (TBWL).

Diana is a Queen.  Period.  Snyder does an awesome job of pairing her with the Swamp Thing (an obvious homage to JLA Dark) and providing the reader with just how important he is to the DC Universe.

Diana is also in a bit of servitude in doing the bidding of The Batman Who Laughs (TBWL) as well as the other Batmen from the Multiverse.  It’s strange how these Batmen, who should be the equivalent of Batman in their respective universes, are mere servants to the TBWL.  She is serving as a prison warden in what appears to be Batman’s Rogues Gallery.  She is also tasked with dismantling her invisible jet…..?

In all of this apocalyptic nightmare, Diana has her wit as her exchanges with the B.Rex are priceless.  But apparently there is a level to her prison that is even worse than a cell…The Tartarus Pits.

Snyder and Capullo are literally the Michael Jordan and Scottie Pippen of the comic world.  They are at their best when they are together.  Capullo’s art is the “dotted i’s and crossed t’s” to Snyder’s words.

If lettering was ever integral in story telling, it is now.  Tom Napolitano’s work on TBWL’s dialogue lets you know this character is not only from some sort of Hell, he may be the one running things there.

The scenes where TBWL is reminiscent of a Walking Dead episode where Negan may bring out Lucille and do some damage.  To see the heroes in the middle of the woods, obtaining both directions and threats from TBWL sends a pretty horrific message.  Capullo peppers the Golum-like Robins around TBWL like hounds from hell.  Scary….

Bruce is still alive and he’s developed communication with Diana and the others.  Again, Tom Napolitano’s shading of the lettering (grey for Bruce, gold for Diana) allows the reader to seamlessly go through this comic.

Batman is at odds in strategy with Wonder Woman.   Bruce wants to pull back and preserve who is left of our current heroes.  Diana wants to press on, and her mysterious prisoner in the Pits is her “Ace in the hole” (pun intended).

The Batman has a power ring…?  And that thing can bring back the dead… (Love the cowboy cameo in this forest battle)

Positives (even even more)

Who is talking to the Main Man?  And what is up his sleeve?

Where is Superman?  We see a Princess Leia cameo of him (ala in projection form on some type of motorcycle…?).

While I never divulge big moments as you need to buy the book, I can only ask “Did this happen?”  “Did Diana just do that?”

That Button?  Hey – where have we seen that before?

Cover Art… Cover Art…Cover Art.  I wish a sound track accompanied this book.  If it did, these would be an ideal album cover for each record.

That being said, can’t you just hear some AC/DC or some KISS blaring as Bruce, Diana and Clark hit the stage?

Picture tumble weeds blowing and crickets chirping.  This section should not exist in a review for this book!

Capullo draws a mighty intimidating cast of heroes.  Snyder weaves what may be the final tale of the Metal/Multi Universes.  All hands on deck for this… and Clark has not even weighed in yet.  Get your hands on this comic.  This is as iconic as the issues where Superman’s tattered cape is flapping in the wind and Batman’s spine was cracked by Bane.