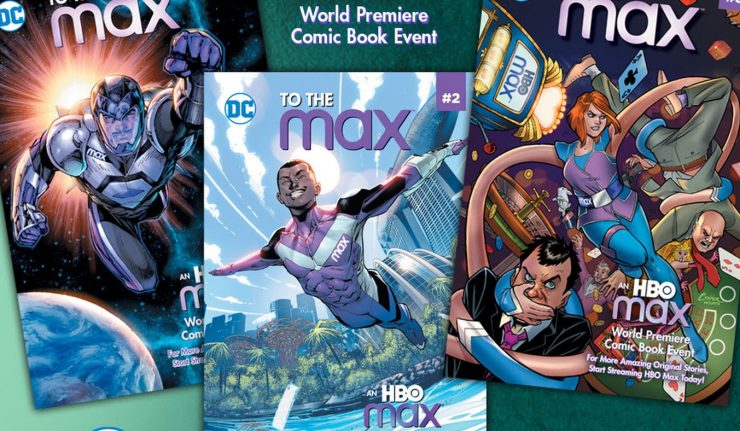 Our golden trio has some competition thanks to a new team-up between HBO Max and DC Comics. A new original comic book series titled To The Max features stories about ordinary folk achieving their maximum potential when they turn into superheroes thanks to a new DC character: Max the dog. A dog named Max? How original right?

The comic is free to download starting Monday, June 22nd, 2020. The digital comic features three 8-page chapters. We meet Brian, Hector, and Olivia who meet Max and gain various new superpowers like shapeshifting, teleportation, and flying. the comics themselves feature many HBO easter eggs to shows such as Friends, Game of Thrones, Sex and the City, and the Big Bang Theory.

“We are thrilled to partner with the amazing team at DC to present this creative, personification of HBO Max as a team of powerful comic book superheroes,” said Robert Greenblatt, Chairman, Warner Media Entertainment and Direct-To-Consumer. “These fun, original stories depict a diverse range of ordinary individuals who are symbolic of the depth and breadth of programming that is available on the platform, driving home the message that HBO Max has something for everyone. DC and HBO Max both share in the belief that great storytelling is one of the most powerful ways to engage and connect with people,” said DC Chief Creative Officer and Publisher Jim Lee. “We are excited to share these new and original stories of Hector, Brian, Olivia and Max with the DC fans, and all fans of great entertainment content. These are superhero stories at their core, but they are also a pop culture scavenger hunt for the most media savvy!”

To the Max: Hector:  A Cuban American schoolteacher finds a mysterious device, which sends him flying into an incredible outer-space rescue mission. Cover art is by Lee, penciled by Scot Eaton, and written by Ivan Cohen.

To The Max: Brian:  An African American scuba instructor who is transformed into a superhero must save innocent people from a deadly storm in Singapore. Cover art is by Jorge Jimenez, penciled by Hendry Prasetya, and written by Cohen.

To The Max: Olivia: A down-on-her-luck standup comic, the only thing standing between her and her audience are gun-toting criminals who plan to rob a Las Vegas casino. Cover art is by Amanda Conner, penciled by Laura Braga and written by Cohen.