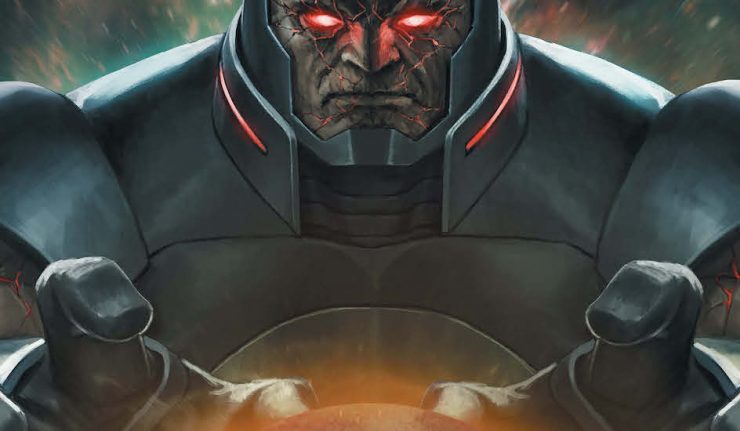 Justice League Odyssey #21 opens in a bad place. Darkseid launches a frontal assault. Jessica Cruz must lead a counter strike of Blackfire, Dex-Starr, Gamma Knife, and more. But there’s still the self-proclaimed Master of Time, Epoch.  Epoch’s technology could fall into the wrong hands, fail due to human error, or obliterate the universe’s biggest threats!

At some point, it will be noticed that Jessica features prominently in every review of this book written by this reviewer. The reviewer acknowledges this and will continue praising Cruz. She is the best character because she is driving the story.

In the first place, Odyssey started as a team story. It quickly became the tale of a stowaway with a mission. It has been Jessica’s intuition that got the team this far. Her tenacity is not only a great example it’s the reason Jessica can push herself beyond what should be possible. The results are powerful and inspiring.

Once Darkseid took over Cyborg, Starfire, and Azrael and momentarily killed Cruz, she was reborn. That rebirth has made her into a force that is driving the narrative. Along the way, she has drafted Orion, Blackfire, Dex-Starr, Gamma Knife, and Epoch to her cause.

What makes this so impressive is that they don’t entirely agree with her. They think she is soft because she wants to save her friends. They distrust her emotions and this makes her character even more important. She’s not trying to just kill, she’s fighting to save her team, her friends, and her family. Despite everyone doubting her.

By comparison, Epoch proves having an oversized ego is a prerequisite for declaring yourself the Master of Time. When Jessica confronts him about human flaws and errors that his preparation can’t account for he becomes combative. Then his arrogance takes over and it’s a lovely example of how ugly people can become when they believe they are right.

Dex-Starr is. From playing with revision machine pieces to keeping its word, this feline warrior is a standout. Find out more when you read it.

This reviewer could find no examples, and encourages you to try.

Justice League Odyssey is a wonderful story. This issue assembles the pieces and builds the tension with every panel. The rise of Jessica is the heartbeat. She pumps blood into every scene. Dan Abnett and his amazing team should be proud of their work. William Conrad’s addition to the team is seamless and keeps the characters readers know and love exactly the way they should.

When characters can forge their destinies they become unstoppable. Cruz is facing numerous challenges. There are doubters on all sides. It feels like everyone is waiting for her to fail. But she doesn’t, the book thrives, and the reader is left knowing that book supports a character with the will to find the way.