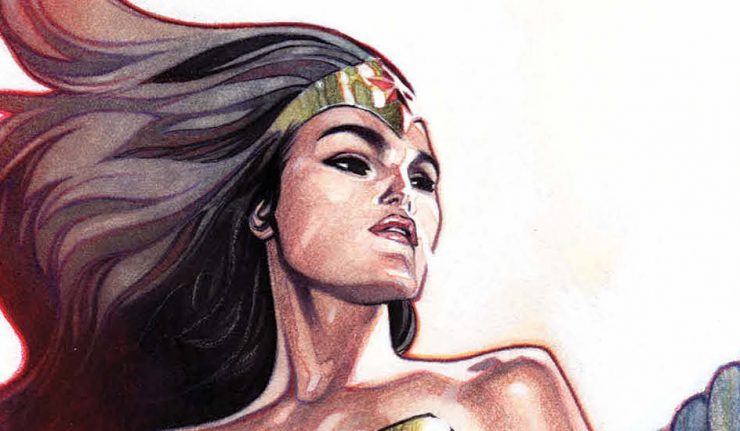 Warmaster’s plot to destroy Wonder Woman’s family is nearly complete…but Diana has reunited with her former protégé Donna Troy! Are the two of them enough to face the might of the Four Horsewomen? Or is the Age of the Amazons at an end?

The cover by Robson Rocha, Danny Miki and Romulo Fajardo Jr. is cool. All three characters look great with a lot of detail. The purple sky is cool and I like background a lot.

The interior art is solid as well. Romulo Fajardo Jr.’s colors are great as always; they’re really vibrant. There detailing looks good. And the characters are expressive.

It is cool to see Wonder Woman and Donna Troy fight side by side. It really feels like Donna can’t catch a break so it’s nice that she just gets to be cool and kick ass in this without the weird villain baggage that keeps getting thrown on her since the New 52.

I like how far Diana is willing to go to save Warmaster. Wonder Woman always chooses compassion when she can and Orlando always depicts that well.

While it was nice to have Donna in this, she doesn’t get to do much. She really is just there for action. Diana and Donna reuniting doesn’t feel as warm or as exciting as it should. There’s this weird tension in the air; I hope future issues have them reconcile and that Donna gets to stick around beyond this. Steve Orlando writes Diana so well; I want to see what he can do with Donna for an extended period.

I feel like I’m not understanding the story. Von Gunther invaded Themyscira a long time; the Amazons won and Hippolyta granted them mercy. The book even shows a flashback of this. But all of the present day dialogue insists that the Amazons did something wrong. My only guess is that something is going to be revealed in a future issue but I thought it was weird to show Hippolyta show mercy when the entire point of this thing is that the Amazons were wrong. Signals are being mixed.

This is an okay issue. It’s well written; Orlando knows how to write Diana. And the art is great too; there’s cool action in this. But the overall story does very little for me. It’s not bad; I just don’t think it’s that interesting.