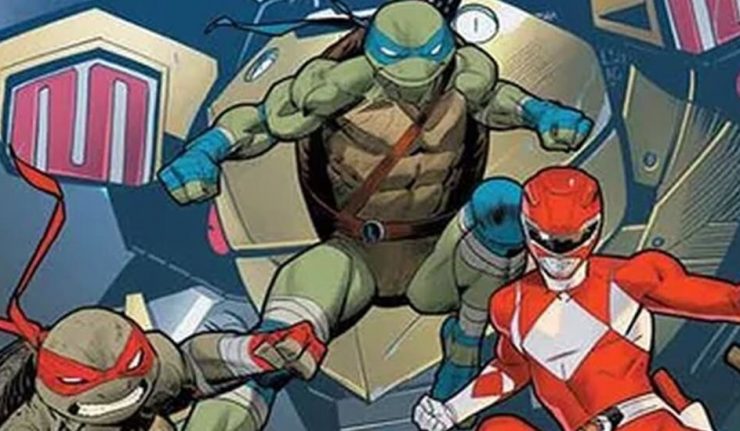 It’s the ultimate showdown between the Mighty Morphin’ Power Rangers and Teenage Mutant Ninja Turtles, up against the joint forces of Rita Repulsa and Shredder! Cowabunga!

Dan Mora’s cover is great. I love the style and the bright vibrant colors. The turtle zord looks awesome.

The finale features a lot of what fans would want from a crossover like this. The turtles, along with April, are morphed Rangers and get to use the Megazord. There’s a turtle zord that combines with the Megazord. Shredder is the evil Green Ranger and uses the Dragon Zord. There is something undeniably cool about all of that.

I don’t love the art. Stylistically, it works. It’s not poorly drawn but it’s weirdly impersonal. There are a lot of wide shots; close-ups are few and far between. And that takes me out. It’s hard to get emotionally invested when I can’t really see anybody. Wide shots during the big action moments make sense but a lot of them are during dialogue exchanges. It’s bizarre.

The Rangers hardly have a role in this issue. Good crossovers balance both entities but the Turtles dominate this issue. They do most of the action and get most of the dialogue. I think Trini has one line of dialogue in this entire issue. I am more of a Power Rangers fan so it’s disappointing that they have so little presence in this thing.

Additionally, I don’t feel any of the connections between the two teams. The end of the issue pairs everybody off; team crossovers do this to compare the similar members of a team. During a Marvel/DC crossover, this would happen between Captain America and Superman due to their similarities. But these scenes feel empty here. Billy and Donatello make sense since they’re both geeks and the story started with Tommy and Raphael so they work. But that’s about it.

I didn’t love this issue and that’s disappointing. It does a lot right. The fan service elements work and are fun. But it all feels so impersonal. The Rangers aren’t present enough and there’s no real emotional core. And the choices with the art only make it worse. It’s not the worst but I think it could have been stronger.