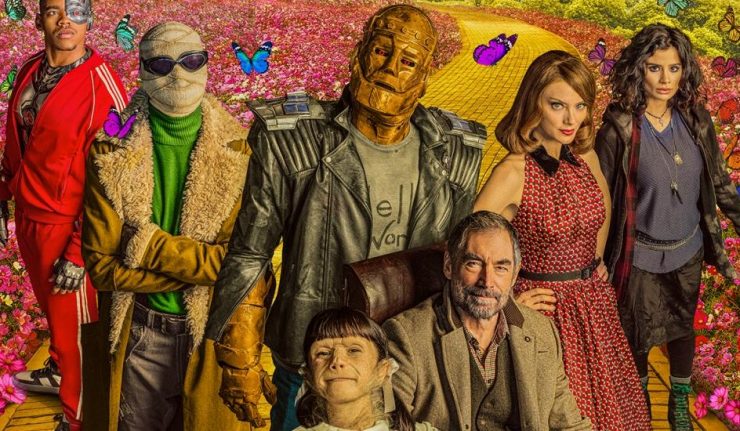 Doom Patrol 2×01 – “Fun Size Patrol”: Niles, Jane, Cliff, Rita, Vic, and Dorothy are still trapped in miniature-size, weeks after the events of last season. Camped out in Cliff’s miniature race-track set up, Dorothy tries to befriend both Cliff and Jane, while Larry does his best to figure out a way to restore everyone to their normal size once again. Meanwhile, Rita asks Vic for help in using her elastic abilities for good, while Jane hides out in the Underground and Niles tries everything to earn forgiveness for his past deeds. In the end though, Niles will have to sacrifice something very precious, by making a bargain with Willoughby Kipling in order to help the team and keep his daughter safe – and the world safe from her imaginary friends.

Doom Patrol 2×02 – “Tyme Patrol”: Cliff, Jane, and Rita pursue Dr. Tyme (guest star BRANDON PEREA) – and his time-altering space mineral – in their reluctant quest to help Niles and Dorothy. At a support group, Vic meets Roni, a feisty military vet who challenges his beliefs. And Larry comes face-to-face with his past at a funeral.

Doom Patrol 2×03 – “Pain Patrol”: In the wake of a terrifying omen, Niles and Rita enter the interdimensional palace of the infamous Red Jack, who feeds on pain and has taken Larry prisoner. Jane is called to The Underground to receive an ultimatum, while her physical body travels to Florida with Cliff, who’s eager to prove he’s a good father. Back at the manor, Dorothy’s game of hide and seek ends badly.

The second season of Doom Patrol starts with a bang, with the first three episodes dropping all at once. I am happy to see that all characters have returned for the new season. And especially pleased to see new character Dorothy Spinner join the team.

In the first episode “Fun Size Patrol”, the group are struggling wth their reduced size as well as the recent revelation that the Chief had masterminded the accidents that had made them the freaks that they are.

I find it interesting that the Chief has been revealed to have a hand in Cyborg and Dorothy’s origins as well. The Chief had convinced Silas Stone to prioritize saving Vic over his mother after the accident that severely injured them both. And Dorothy has been introduced as Niles Caulder’s daughter, a relationship that did not exist in the comics.

I really like that they’ve written this relationship into the series. Dorothy’s presence shows us a more tender and emotional side to the Chief, who has come off as somewhat uncaring and manipulative in the past. And as we’ll discover over the next couple episodes, Dorothy’s existence goes a long way towards explaining the Chief’s motives for what he’s done to his team.

Willoughby Kipling makes a return in the Season Two premiere episode. If Kipling seems awfully similar to John Constantine, it turns out there’s a good reason for this. Kipling is a character taken from Grant Morrison’s Doom Patrol comic. Morrison had planned to use John Constantine in a series, but DC would not allow him to use the character at that time. To get around this, Morrison created Kipling as a stand-in for the Hellblazer.

Eventually, to restore the team’s size, Niles has to sacrifice an amulet that had been prolonging his life, which will have important ramifications as the season develops. But Willoughby lives up to his word, returning the team to their proper scale. This comes as quite a relief to Larry. As the team’s only normal-sized member, Larry had been landed the chore of cooking mini-meals and creating tiny furniture for his teammates.

In the next episode, “Tyme Patrol”, we learn more about Dorothy and also about the Chief’s motives. We see the fateful first meeting between the father and daughter, but from the Chief’s perspective. It seems that Dorothy is either immortal or extremely long-lived. Not aging a day over the next few years. The Chief does not want to leave his daughter orphaned. So he embarks on a quest to find a extend his life – to outlive her by a single day.

Larry manages to divine the fact that he, Cliff, Rita, and Jane are the Chief’s failed experiments in his quest for immortality. And now that he’s sacrificed his amulet, he is dying. Having lived well over a century, the years are quickly catching up with him.

Also, I love that we got a chance to meet Danny the Street back when he was Danny the Alley in Victorian times.

In an attempt to prolong the Chief’s life, the team sets off to steal the helmet of a villain called Dr. Tyme – “Yes, that’s how it’s spelled!”. This encounter gives us some great examples of the series’ signature humour. For example, Tyme has used his powers to continually live in August 8, 1980, date when humanity peaked. Or as the Doom Patrol sees it, roller disco Hell.

Finally, in “Pain Patrol”, the Chief and Rita face the villain Red Jack, who has taken Larry captive. Red Jack, who lives off of suffering, admires the Chiefs ability to cause suffering. So, he offers to make the Niles his apprentice. However, the Chief rejects this offer, even though it would allow him to extend his life.

Clearly, Niles has evolved and regrets the pain he has caused. We see him tell Dorothy that sometimes just apologizing isn’t enough and that sometimes you have to find a way to make things better. Soon after, we see him start creating plans for something he calls “Robotman 2.0”. This hints at some very interesting story possibilities.

I was quite struck by how faithful Red Jack’s appearance was to his comic book appearance. He looks like he stepped directly out of the pages of the comic book. Overall, this series has made a painstaking effort to make the characters look like they do in the comics. The costuming and makeup are spot on. There may be liberties taken with the comic book’s continuity, but the show is remarkably faithful to the show’s visual appearance.

I adored this show’s first season, and the Season Two premiere betrays no drop in quality. However, there are a couple thing’s I’d like to address.

The first is the presence of Cyborg. At first, he seemed somewhat out of place, considering that he has no history with the group in the comics. It seemed especially jarring because it echoed the way he was retroactively inserted into the original lineup of the Justice League in the New 52 comics and in the movie. It seems odd that DC keeps using the exact same move to add diversity: just add Cyborg.

However, the character is well written and performed. And I’ll admit he has grown on me. But, it still feels like his parts in the show are tacked on. It seems to me that if you edited his solo segments out of these episodes, without making much difference. In fact, it might actually improve the pacing a bit. I think some work needs to be done to make Vic into a more organic part of the team, rather than an outsider that keeps hanging around.

The second point is that I really miss Mr. Nobody’s narration. Even if there are no plans for him to return as a villain, they should make him the narrator in perpetuity.

DC has a lot of brilliant shows currently, but Doom Patrol has quickly become my favourite. The Series Two premiere indicates that the new season will be just a great as the first. There is nothing quite like that I have ever seen on TV. And it somehow manages to effortlessly balance gut-busting absurd humour and heart-wrenching drama. If you aren’t watching this already, you need to start.