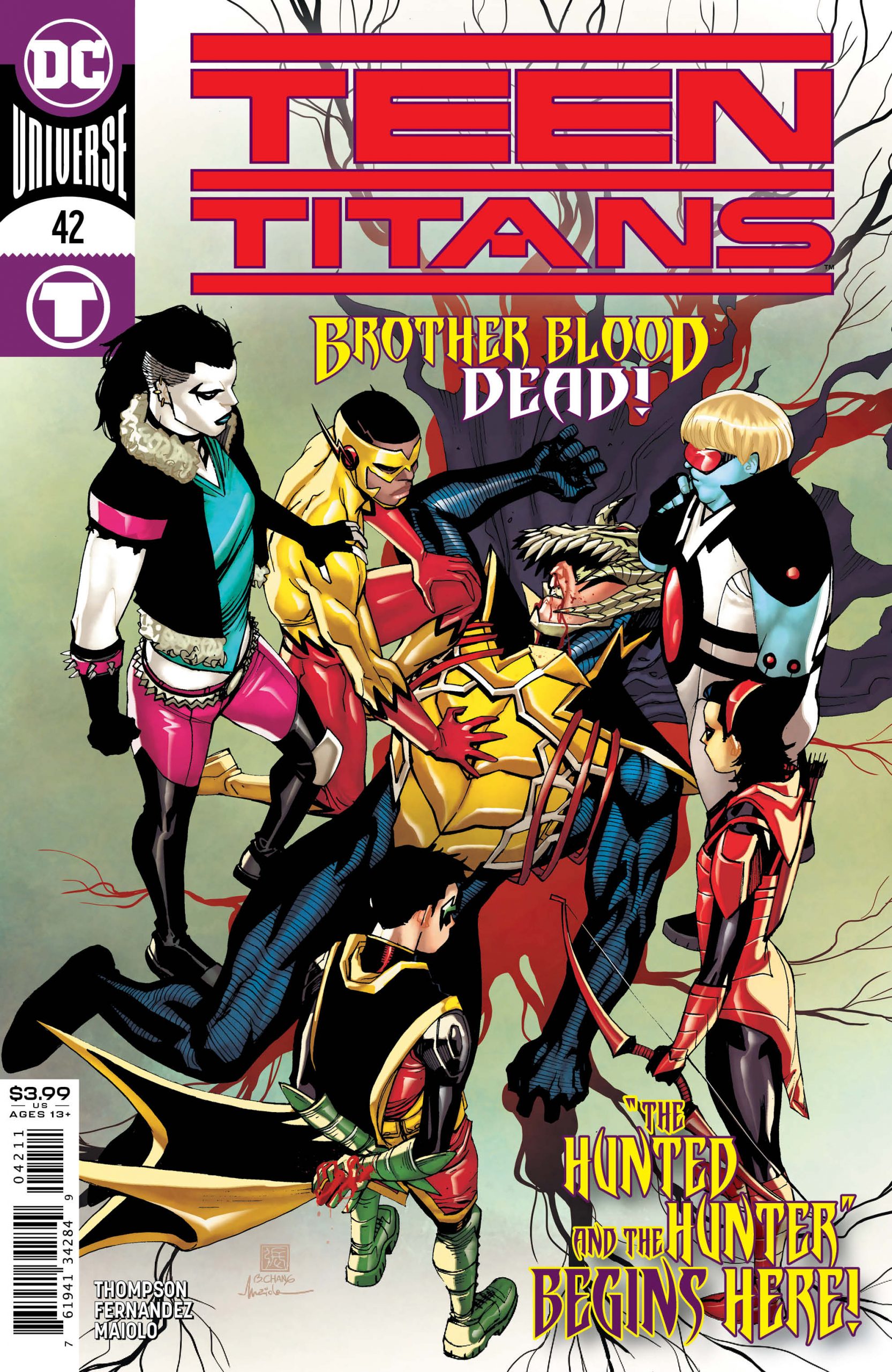 Djinn has gone, and in Teen Titans #42 our heroes are a team no more. Or are they? The appearance of Brother Blood’s dead body leads to an uneasy alliance between the former Titans, as he was one of the villains who’d been locked in their underground prison.

This is a story about family, relationships – one gone, and one possibly just beginning – and building a new future, from the remnants of the past. 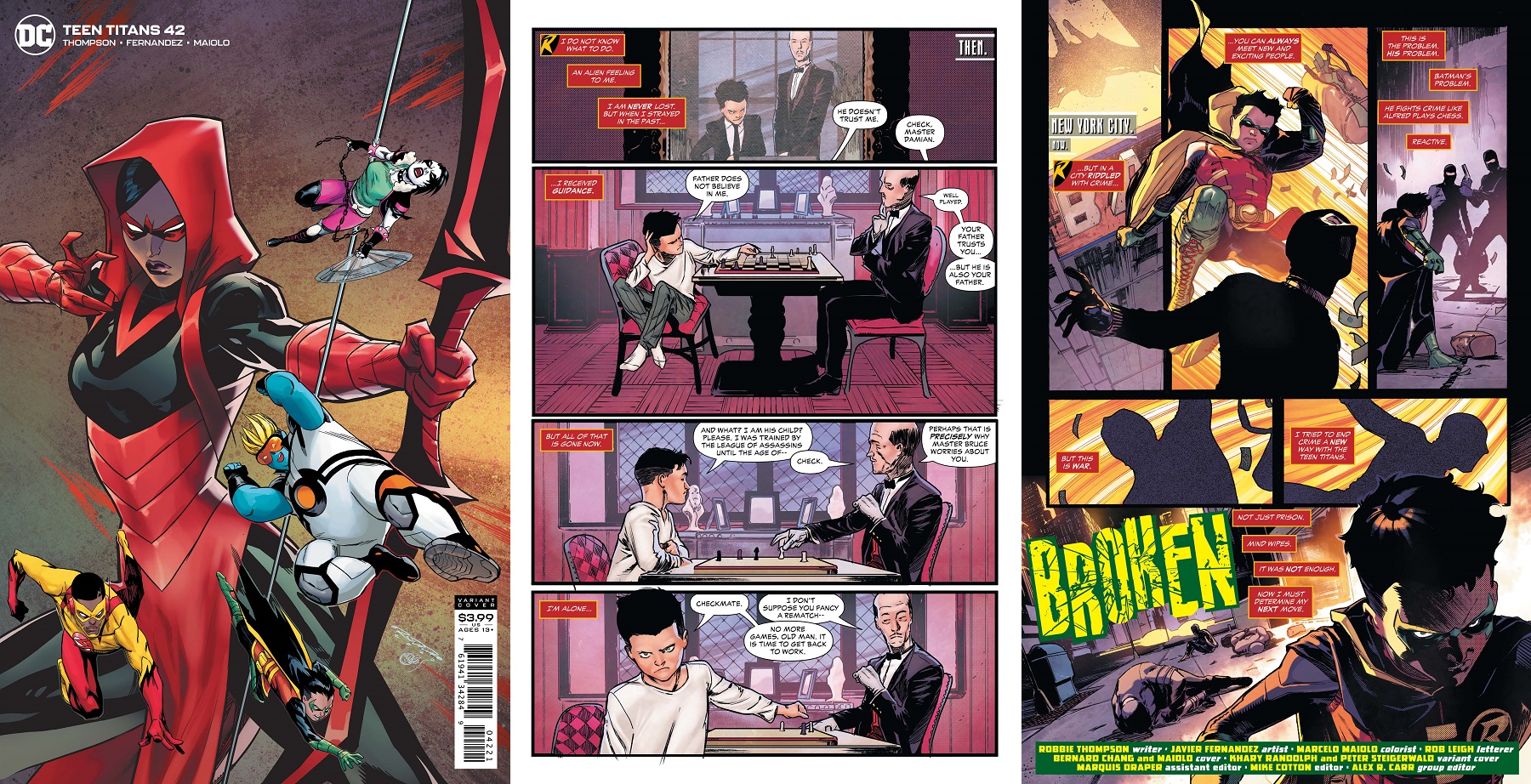 Teen Titans #42 brings a sea of change to the title. Firstly, though we knew that Adam Glass would be leaving the book, his replacement has been co-writing it with him for the past few months. This is Thompson’s first issue flying solo, and it fills me with hope for the continued excellence of this series.

There are some really terrific character moments, showing the relationship between Damian and the late, lamented Alfred Pennyworth. I was already missing my fellow Brit profusely, but these scenes really brought a lump to my throat. The dialogue and emotion on these pages is brilliantly interwoven with the action scenes, making this issue a beautifully poignant, thoughtful, and entertaining, read.

The art of Javier Fernandez and Marcelo Maiolo makes it even moreso. I’ve loved Javi’s art for years now, and I’ve always wondered what an issue populated by teenage characters would look like when drawn by him. Now I know… just as awesome as everything else he draws!

His use of texture and light is sublime, and his storytelling is exquisite. When you look at Damian’s face you can really tell when he’s sad, or thoughtful, or angry. The character acting in all Javier’s work has always been great, and this issue is no exception. 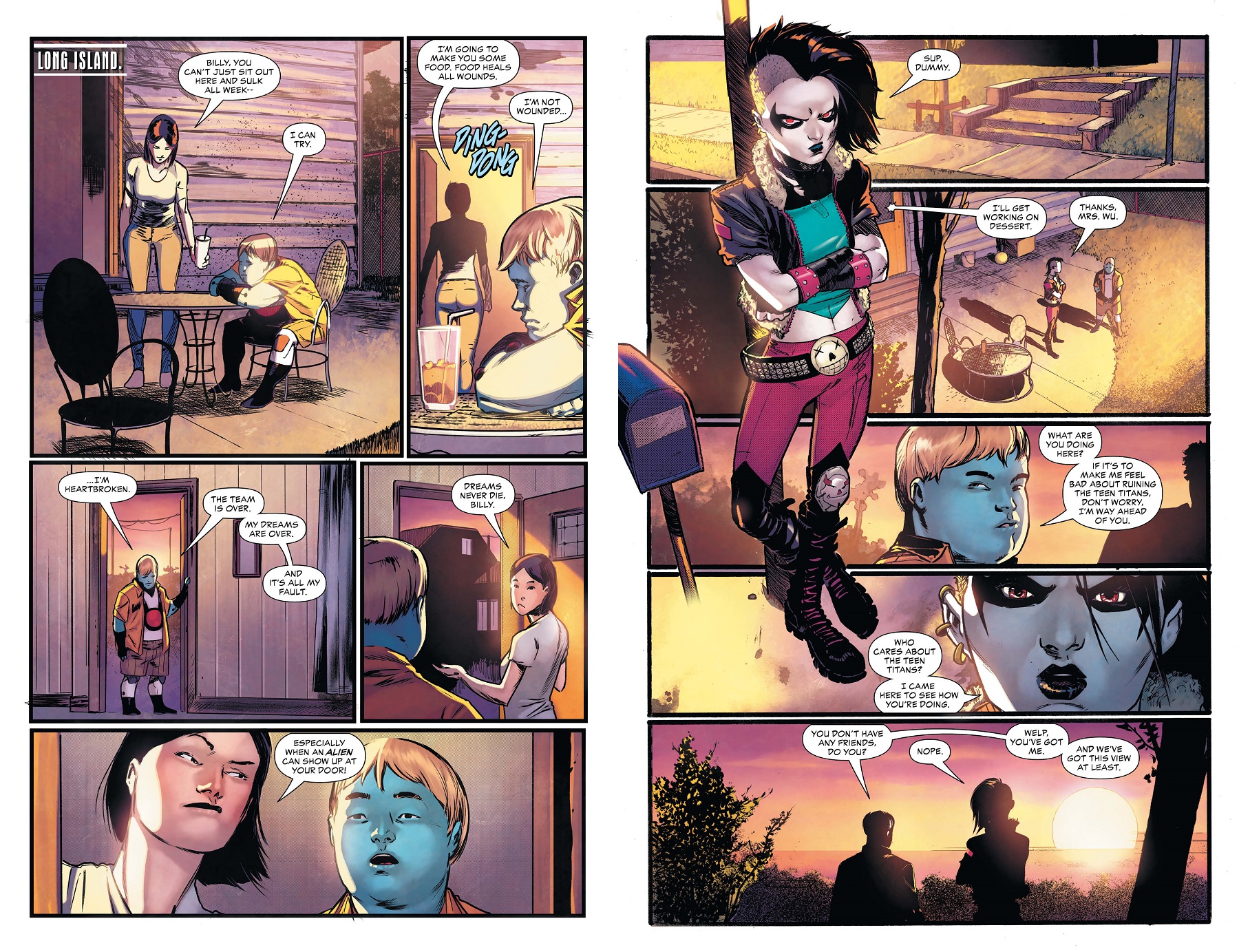 Look at all the body language and the spot on facial expressions in the art attached. It’s superb! Then look at the action with Robin v the bad guys. Javier Fernandez is a comic-book artist who can truly draw anything.

Oh… and that sunset, with the beautiful color flares by Teen Titans veteran Marcelo Maiolo.. wow! You know exactly what time of day it is, thanks to gorgeous line-art, and sublime color work. I love this team working together!

I honestly thought that Adam Glass’ departure would mean a loss in quality, but I’m very pleased to have been proven wrong. In all honesty, I don’t have a single complaint about this issue. Instead, I anxiously look forward to seeing where Mr. Thompson takes the team I’ve grown to love over the last couple of years. I’ll really miss Adam Glass’ voice on this book, but I’m sure that he’ll be working on his new projects, content in the knowledge that he’s left Teen Titans in very capable hands.

Add Rob Leigh’s masterful lettering (check out page 2, for example) and you’ll see another artist at the top of his game. Nope… nothing at all to complain about.

This book is clearly heading in a new direction, and the Damian Wayne story, “Bat And Mouse” in the amazing Robin 80th Anniversary 100-Page Super Spectacular, was the first step on this new path.

If the quality remains this high, I’m signing up for the whole journey.