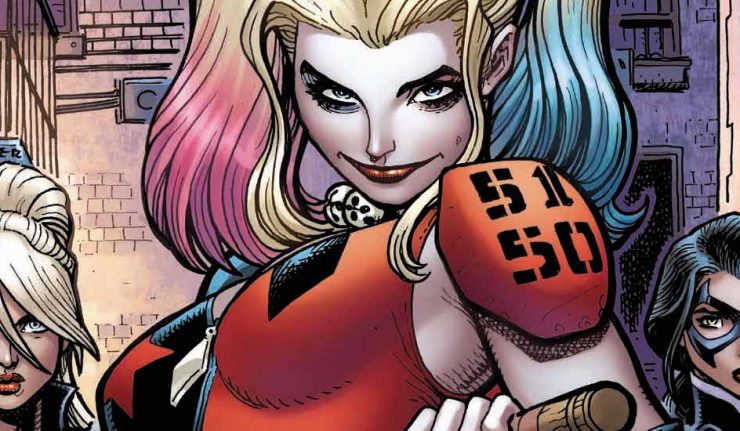 Over the course of her illustrious and very high-class career, Harley’s met pretty much every super-villain who ever worked in Gotham City. Some hate her. Some love her. But none of that’s gonna matter once they see how many zeroes there are on the bounty The Joker’s offering for her head! Sorry, Harley-it’s just business. Your next of kin will understand, right? Meanwhile, Cassandra Cain finds herself in the unenviable position of being Harley Quinn’s bodyguard…but this could be her opportunity to learn a little about, y’know, loosening up? If she’s currently wound too tight, then just sit next to Auntie Harley…she’s got more than her share of loose screws!

Amanda Conner and Paul Mounts’ cover is cool. It has a weird album cover vibe. It sells the tone of the book well.

The interior art is solid. It’s exaggerated and animated in a way that fits Harley well. It gives the book an energy that makes it engaging. I also really like the new designs for Black Canary, Huntress and the Cassandra Cain Batgirl. Speaking of which, it was really cool to see Cass as Batgirl again.

I think this book will appease people who were frustrated by the movie’s lack of Barbara Gordon and nontraditional Cassandra Cain. It has a similar tone and feel mostly because Conner and Jimmy Palmiotti’s Harley Quinn series directly inspired the film. But it was cool to see that tone applied to a more traditional take on these characters.

It was great to see Atlee in this. I loved that Starfire series so I was thrilled when Atlee showed up. Her and Harley have some fun banter.

I like where this story is going with Joker. The ending is especially exciting and I am looking forward to future issue.

The Birds of Prey don’t have much to do in this. They’re kind of just there to react to this crazy Harley situation. I hope future issues give them more of an active role. Cassandra is the only one that really gets to do a cool thing.

This is a really fun issue. I love the tone and the attitude. The plot is fun and interesting. And the art is great. My only issues is that I wish Huntress and Black Canary had more to do.