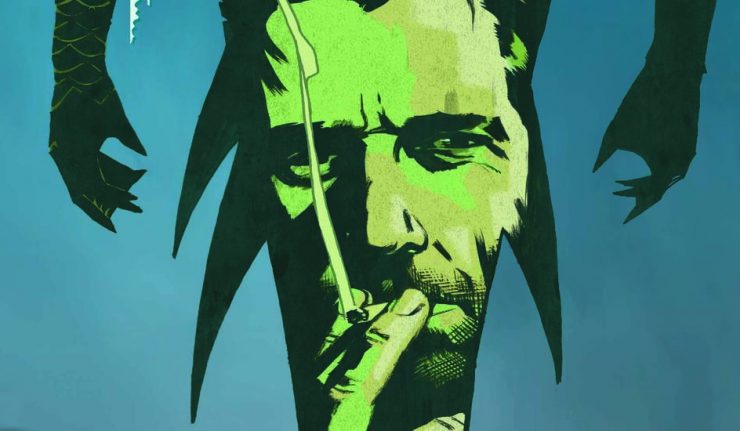 John Constantine: Hellblazer #7: How are all those poor British fishermen supposed to keep the French out of their waters? By summoning an ancient merwoman, perhaps? Of course, there’s the little matter of what to do with her once she’s served her purpose…and what to do about this John Constantine fellow who’s come sniffing around to find her himself…

Throughout Spurrier’s run on Constantine so far he’s been able to comment on various issues affecting contemporary British life and this month features one of his most potent stories yet. Anyone living in Britain since 2015/16 can tell you about how Britain’s fishing industry has been a touchy subject. To surmise the issue, one of the arguments Brexit supporters made was that leaving the EU would return ‘British’ waters to British fisherman. The commonly depicted enemy was the French, who would use EU law to fish in areas which Brexit supporters argued should belong to them.

What Spurrier does so well here is dramatize this issue in a way that doesn’t water down the subject (pun not intended). Spurrier presents characters across the spectrum from a Nigel Farage stand-in, to fishermen who work on the trawlers to a young man who wants the approval of his peers. Oh, and a mermaid. And so readers get this urban fantasy take on what is a serious talking point in British politics.

Spurrier never feels like he’s talking down to any reader because he humanizes the fishermen’s struggles. He adds a layer of understanding to why people act the way they do, as well as why certain political beliefs may be passed down across generations. John Constantine: Hellblazer continues to be one of (if not the) most relevant comic in DC’s current line-up.

Of course praise needs to be given to Aaron Campbell and Jordie Bellaire for the wonderful artwork. The cold depiction of life as a fisherman is presented in chilling detail (pun again not intended).

As one might expect after a lengthy list of positives, there’s very little wrong here. If a criticism was to be pried from the story’s hands, perhaps more could be down with the tertiary fishing characters. They’re mainly presented as stereotypical Brexiteers, which makes sense in the context of the story, but it would have been nice to see them fleshed out a little more. It’s possible this will happen in the future however, this is only part one after all.

Simon Spurrier’s Constantine is fantastic and each month seems to get better somehow. This is currently the comic for British people who have fallen out of love with the medium. This is what will remind people why they loved comics in the first place. Top it off with artwork from Aaron Campbell and colours from Jordie Bellaire and you’re set. 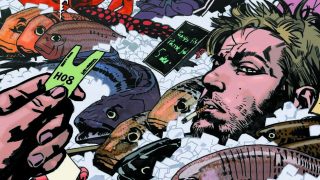