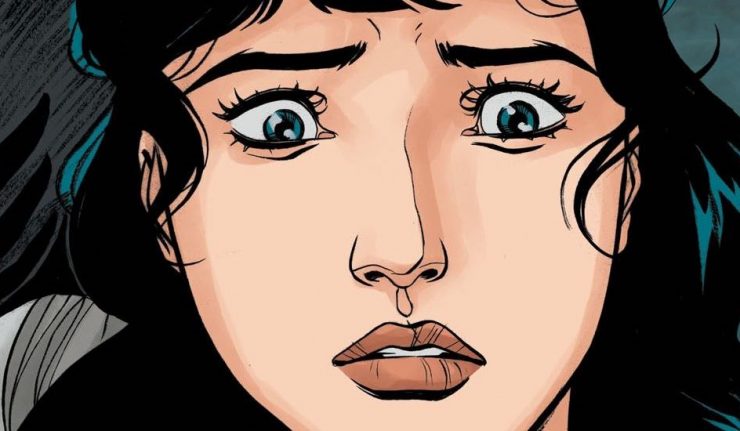 Princess Diana of Themyscira believes that her 16th birthday will be one of new beginning. But her birthday celebrations are cut short when rafts carrying refugees break through the barrier that separates her island home from the outside world. When Diana defies the Amazons to try to bring the outsiders to safety, she finds herself swept away by the stormy sea. Cut off from everything she’s ever known, Diana herself becomes a refugee in an unfamiliar land.

The cover is simple but cool. The art looks good and I like the logo.

The interior art is solid; it’s a pretty book. The backgrounds are sometimes simplistic but they’re also effective. I think the characters look great; they’re expressive and detailed without being too exaggerated.

This is an interesting take on Diana. The immediate point of interest is that she’s sixteen; Diana is usually older when she leaves the island. I enjoyed seeing how teenage Diana would handle the story.

In keeping with Diana being a teenager, puberty is a part of the story. It’s interesting to see Diana have to deal with that and how bizarre it is to the Amazons who have never experienced it before.

This is not a traditional superhero story. The story has Diana help people in other ways besides beating up bad guys. She gets to do that too but without a costume or anything. Laurie Halse Anderson focuses on Diana’s experience as a refugee and how she relates to other refugees. It’s a solid take.

I appreciate that the story can deal with human trafficking with being exploitative. There’s no harsh imagery for the sake of it. The story is intense enough knowing what is happening. I don’t like when fiction feels the need to show it in explicit detail.

I don’t love how the story handles Steve Trevor. Anderson split him into two people, Steve and Trevor, a married couple. And then neither really has much of a role. I guess I don’t understand the purpose of making it two characters especially when they’re such small roles.

This is a fun and unique take on Diana’s story. Anderson wrote a character driven and charming story with some nice art. I can see people being turned off by the changes to some of the traditional story beats but I enjoyed the fresh take.