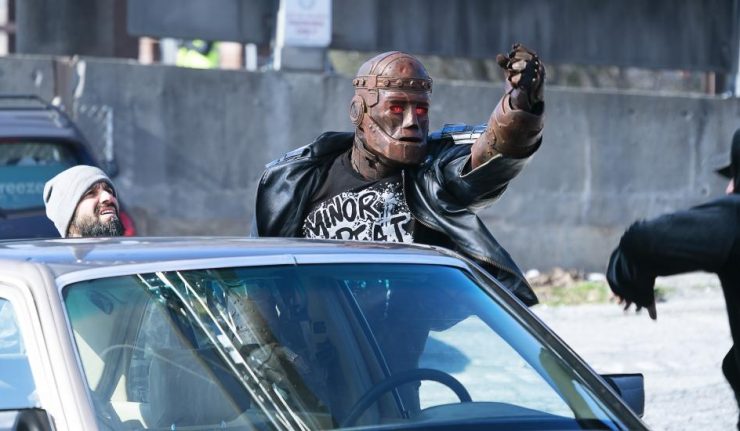 Doom Patrol 2×06 – “Finger Patrol“: Dorothy finally finds a friend in Baby Doll – until playtime goes awry. Cliff discovers that Niles plans to give him human-like upgrades. Vic devises a plan to win Roni back. After Rita has a lousy audition, Larry brings her along to meet his family and learns more about the life he left behind.

There’s a lot going on in the latest episode of Doom Patrol. Instead of one single storyline taking the lead, we see important developments in several characters’ story arcs. I love it when a series takes a break from dealing with the threat of the week and focuses on the series’ subplots.

“Finger Patrol” exhibits Doom Patrol’s signature mix of the poignancy character moments punctuated with diversions into hilarity. I love a lot of the little bits of random silliness, like Baby Doll and Dorothy covering Robotman and Cyborg with stickers. And we also see that a few of last episode’s sex ghosts are lingering in the mansion.

But the best bit comes after Cliff tries to sell Vic on them fighting together as “Steele & Stone“. Cliff proceeds to fantasize “Steele and Stone” as a 70s-style buddy cop show, complete with cheesy theme song. And seeing Timothy Dalton wearing an afro, with the caption “And Niles Caulder as ‘The Chief'” is priceless. I really would love to see a complete episode done in the style of Steel & Stone.

This directly leads to Cliff’s inept first attempt at actual crimefighting. In the short encounter, one of his opponents loses a finger. Oddly, Cliff opts to keep the finger, dropping it in his pocket. What could Cliff be planning to do with it? Presumably, his doing so will have some significance. Why else would the episode’s title reference Cliff’s bizarre trophy?

Meanwhile, Rita auditions for an acting role in a local theatre production, but blows her audition. While delivering her prepared monologue, she relives the memory of her mother prostituting herself to get Rita her first big role. Later Rita finds out she actually got the role. But will she be able to perform or will she continue to be haunted by this memory?

There’s not much comedy for Larry in this episode. Rita accompanies him on a family reunion. At first it seems that Larry is reconnecting with his son, even going so far as coming out to him. However, it turns out that the reunion was a trap. Larry and Rita escape, but Larry’s grandson is killed in the process. It now seems less likely than ever that Larry will be able to reconcile with his remaining family.

Another major part of the episode is the short-lived friendship between Dorothy and Baby Doll It seems a great idea at first. The Chief introduces Jane’s Baby Doll personality to Dorothy and the two hit it off immediately. But Dorothy starts to tire of their games, unable to match Baby Doll’s constant energy.

It also seems that Dorothy is somewhat more mature than Baby Doll. Could it be that Dorothy is starting to grow up? Last episode raised the question of whether Dorothy is really 11 or 100 and 3/4 years old. Maybe she is finally reaching the end of her long childhood and starting into adolescence?

But their relationship takes a tragic turn when Baby Doll gets mad and tries to harm Dorothy. Dorothy’s imaginary friend Manny attempts to protect. Baby Doll kills Manny, and Dorothy retaliates by making a wish. This unleashes Candlemaker on Baby Doll.

Baby Doll retreats to the Underground, but the Candlemaker follows her there and kills her. This is a shocking turn of events which raises a number of questions. How will the death of one of her personalities affect Jane? Will Niles take the side of his daughter against Jane?

And how can the Candlemaker even enter the Underground. Clearly he’s a powerful entity, but just how powerful is he? And what if Dorothy turns him against the Chief and the Doom Patrol? This certainly bodes poorly for the team’s future.

“Finger Patrol” is one of the best episodes yet of this show, and Doom Patrol is already a near perfect series. Cyborg’s still seems a bit out of place on the team to me, but his presence in this episode seems more integral to the overall episode than in earlier episodes. This is definitely a big improvement, and hopefully this trend will continue as the season progresses.

Doom Patrol is by far the favourite show that is currently on TV and one of my all-time favourites. It’s an amazing blend of comedy and tragedy quite like any other show I have seen. Hopefully, the show’s creators will continue to maintain this level of quality for many more seasons.