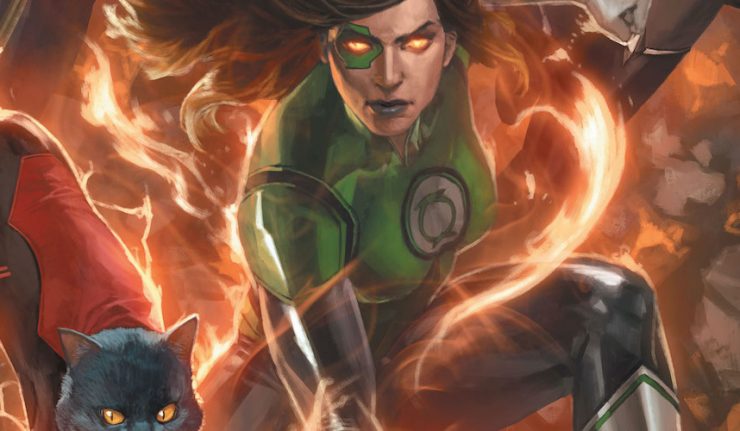 In this review of Justice League Odyssey #22, the secret identity of Gamma Knife is partially revealed. Jessica Cruz is stuck in the past following her banishment by Epoch at the end of the last issue. Cruz makes a new friend into an old partner in an attempt to return to the edge of space and stop the Lord of Apokolips from rewriting history.

Since the first appearance of Gamma Knife, there have been so many questions. Finally, readers get some insight into a few possible answers. Her introduction as the Last of the Space Rangers is pitch-perfect. Fans of Clint Eastwood will detect a familiar tone. The trouble that follows her bravado is emblematic of a troubling present and future.

But, most importantly is the name Gamma Knife is using. She calls herself Suzi Starr. Her father was a Space Ranger. She carries on the legacy in his honor. It’s her job to enforce the law and Suzi Starr takes that responsibility seriously. It’s a thankless job. The suggestions that perhaps her time in the field could be coming to a close are perfectly introduced.

The introduction of Jessica Cruz into the madness is perfectly timed. Readers now know that this is where Epoch sent her at the end of issue #21. She quickly dispenses of the bad guys with raw ferocity and with the help of a future ally that does not recognize her, Cruz realizes she is in the past. In fact, she has arrived at a time when there are no Green Lanterns thanks to a certain villain known as Parallax.

An intriguing possibility is highlighted when Suzi Starr/Gamma Knife reveals an interest in theoretical physics. But the sense of higher purpose she displays to risk her life and help Jessica is character-defining.

An interesting point to note is that the time travel scene is fraught with risks and uncertainty. Suzi Starr believes that she will not survive the trip. However, there is always the chance that this is how she ends up on the edge of space and takes on the moniker of Gamma Knife.

It was an interesting move by writer Dan Abnett to give a Space Ranger the technology to time travel. The sheer optimism from Suzi Starr/Gamma Knife made the likelihood easier to suspend any reader’s disbelief.

The momentum of Justice League Odyssey has kept Jessica Cruz front and center. This issue’s departure into a past that finally offers more insight into Gamma Knife’s identity is a brilliant move. The decision to only reveal certain pieces of information is equally inspired.

The few details shown to the reader invites more questions and possibilities. Meanwhile, the imagination can only fathom what is happening in Cruz’s absence. This is a story that keeps on giving. Ending the issue on a cliffhanger invites all of the mystery that the reader can handle.