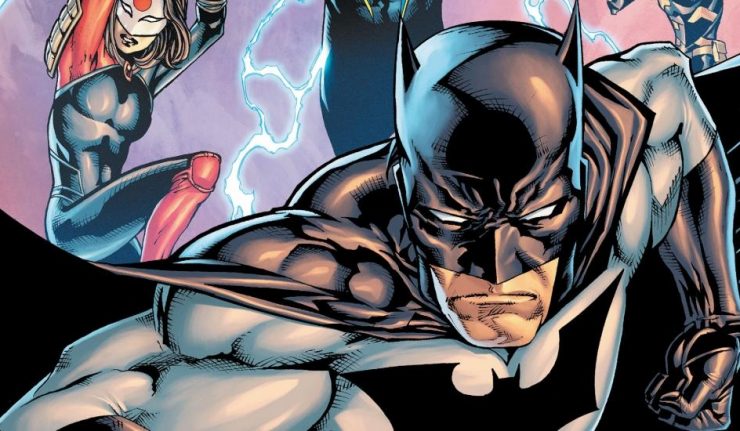 Review: BATMAN AND THE OUTSIDERS #14

Batman and the Outsiders #14: Batman is going to push the Outsiders to their absolute limits in order for them to stop Ra’s al Ghul once and for all. He’ll force them all to use their powers in ways they never imagined and possibly push them over the edge in the process! Batman and Black Lightning will need to decide who the true leader of the team is, or Ra’s’s victory will be assured!

Batman and the Outsiders have been mostly reacting to Ra’s Al Ghul’s attacks in the ongoing war with Ra’s and his League of Assassins. In Batman and the Outsiders #14, Batman finally takes the team on the offensive. And their choice of target is deliberately intended to hurt Ra’s. By taking out one of his Lazarus Pits, they are threatening the Demon Head’s immortality. Sure, Ra’s has other pits, but this target is meant to deliver the message that Batman knows Ra’s vulnerabilities and how to use them against him.

We also get to see Black Lightning showing off his new power upgrade. I hope that Jefferson will keep these enhanced abilities past this storyline. Between his promotion to being one of DC’s heavy hitters and having his own TV series, Jefferson appears to finally be getting recognized as an A-list hero.

I really like the revelation that Batman was already aware of Orphan and the Signal’s defection to Lady Shiva, and had worked that into his plans. This nicely demonstrates Batman’s capabilities as a master strategist, even if he lacks some of the interpersonal skills needed by a good leader.

Jefferson however, has these skills. It seems to me that if one person embodied both their skillsets, he or she would be an ideal leader for any team. Perhaps this is the root of the tension between Bruce and Jefferson. Batman is willing to let Jefferson take on the day to day responsibilities leading the Outsiders, but doesn’t hesitate to override him when he feels the need to. And Jefferson is more naturally attuned to the leadership role, but realizes that many of Batman’s abilities outstrip his own. Neither is willing to commit to the entire role of leader, and nor is either able to totally cede the role.

As for the art, I must say that I find that Dexter Soy’s art makes Batman and the Outsiders one of the most visually appealing books in the DC lineup. And Veronica Gandini’s colouring beautifully complements his art style, and sets the perfect tone for the story.

The war with Ra’s Al Ghul has been the focus for over a year now. While it has been a well-written and exciting storyline, I am starting to feel a bit fatigued. However, it appears that the story is building to a climax in the next few months. At least I hope it is, as I would like to see a bit more variety. If Bryan Hill still has several more chapters planned for this story, then perhaps he should consider throwing in the occasional interlude issue to give the readers a brief change of pace.

Batman and the Outsiders #14 is another fine issue from Bryan Hill and Dexter Soy. Each month they maintain a consistent level of excellence. I look forward to seeing how the story progresses as the Outsiders’ war against Ra’s Al Ghul plays out.