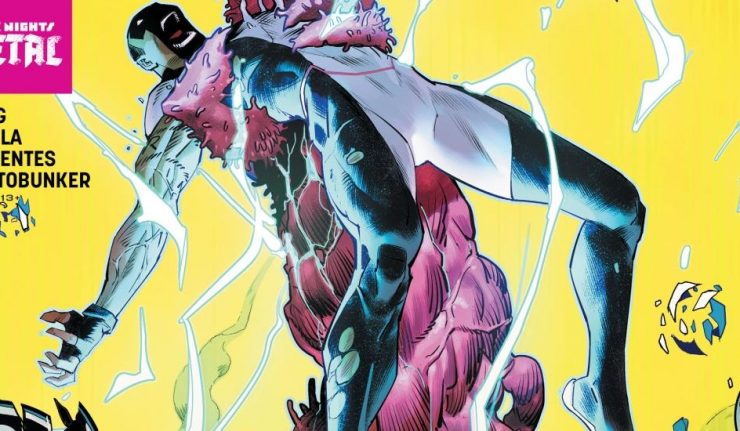 The Terrifics #28: Simon Stagg is dead! After the cataclysmic events of last issue, the line of succession in the house of Stagg has fallen to the Terrifics’ ally Sapphire…or has it? Who is Sebastian Stagg, and what on Earth is he doing with the Parasite at his side? It’s science versus money as the Terrifics battle for the fate of the future!

It looks like COVID-19 isn’t an issue in the DCU, or at least not yet. The Terrifics #28 opens with Mister Terrific welcoming crowds of people, especially children, to his brand new Terrifictech Modern Community Association. This is a community outreach project with a number of seminars and educational programs for the benefit of the citizens of Gateway City.

Mister Terrific’s T-Council is still present in this issue, so it seems that they will likely continue to be a presence for the rest of the series, which is only two issues away now. However, it seems that Jaime Reyes has taken the place of Ted Kord, who is otherwise occupied in the pages of Suicide Squad. I am curious as to what purpose he is meant to serve on a team of scientists, considering that Jaime is not one. Perhaps the scarab gives him some instinctual technological knowledge. Considering how close we are to the end of the series, the question might never get addressed.

And it turns out that Simon Stagg didn’t die last issue, but is barely holding onto life. We see Metamorpho using his powers in a novel fashion by transforming his hand into lung tissue to keep Stagg alive. This provides for a touching moment. Sapphire berates Rex for hating her father, but then discovers the lengths Rex is willing to go to keep Stagg alive.

While that is going on, the Terrifics an the T-Council are fighting the Parasite. The Parasite ultimately proves to pose little challenge. However, in the aftermath of the battle, Michael butts heads with Silas Stone over how to deal with the defeated villain. Silas declares his intention to disrupt the Parasite’s powers permanently. However, this might cause permanent brain damage, which Mister Terrific refuses to allow.

Silas backs down, but sneers at Michael’s principles, stating “One of these days, you ideals will get the best of you”. Clearly, there is a fundamental difference of opinion between the two scientists that could spell trouble for the T-Council. I suspect that Silas will either attempt to take control of the team or resign from it. Hopefully, we will get to see this conflict resolved before the series finale.

Despite Rex’s efforts, Simon succumbs to his injuries, This is actually a fairly significant event, considering that Stagg has been a supporting character that’s been around since 1965. However, the sombre occasion of Simon’s funeral is interrupted by Staggatron crashing into the church, bringing with him Sebastian Stagg. Sapphire reveals that Sebastian is her brother. Sebastian ominously declares that he has come to “claim what is rightfully mine”. This combined with his disrespectful entrance implies that his arrival is likely to cause trouble for the team in the issues ahead.

Not only has The Terrifics been cancelled, but the final three issues of the series are only being released digitally. The Terrifics #28 is the first of these digital only releases. So, readers who have been collecting the series in print will have a three issue gap in their collections. They will eventually be able to get them in print when these issues are collected in a trade paperback. However, this isn’t quite the same. This may be a major annoyance for some readers, but perhaps going digital allows for three more issues for Gene Luen Yang to provide a proper conclusion to the series.

Also, I hate that the series has been cancelled, but considering the state of the comic industry and the sales figure for the title, I can’t really fault DC for the decision to axe the title. In all fairness, DC has supported this title long past the point that other companies would have cancelled it. One thing I love about DC is that they often will take the risk of finishing a high quality title in the face of poor sales. But I understand that as a business, there is a limit to how long they can do so. It’s a tragedy that The Terrifics never found the larger audience that it deserves.

Despite the fact that there’s only two more issues left, and that they are only available in digital form, I urge readers not to drop the title now. This is a fantastic book and The Terrifics #28 has shown that Gene Luen Yang, Sergio Davila, and Vicente Cifuentes are still doing the same great job that they always have.