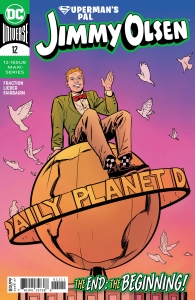 Superman’s Pal Jimmy Olsen #12: Whoa-is that what I think it is? If I’m reading this solicitation text correctly, we made it to issue #12! Mazel tov! Party time! If you see Matt and Steve at the next convention, go buy them a drink because I have no idea how we made it this far! No, wait, I do-it’s all thanks to you guys! In this final issue, with the Daily Planet on the ropes, Jimmy learns something about it that’ll change everything forever.

Last issue tied up a lot of the plot threads, but Superman’s Pal Jimmy Olsen #12 wraps up the remaining questions. It also resolves a major question that’s been lurking in the Superman books in general: what will become of the Daily Planet now that the owner has been revealed as Metropolis’ secret crime boss?

The issue opens with Perry holding a meeting of the Daily Planet staff where he announces that the newspaper will be closing down. He tells them, “Unless some sort of miracle comes bounding through that door right now… tomorrow’s edition will be the last ever published by the Daily Planet”.

This is the moment that Jimmy bursts into the room, wondering what he has missed. Unfortunately, Jimmy isn’t the needed miracle that can save the Planet – or is he? It turns out that through a number of circumstances hinted at through the series, Jimmy is indeed the paper’s salvation.

A number of times in the series, hints have been dropped that someone genetically linked to the Olsens was in Metropolis, despite the three Olsen siblings being elsewhere at the time. We finally find out who that is. It’s no accident that the series has been giving us background history on the Olsen and Luthor families, because it turns out that there’s a blood connection between them. 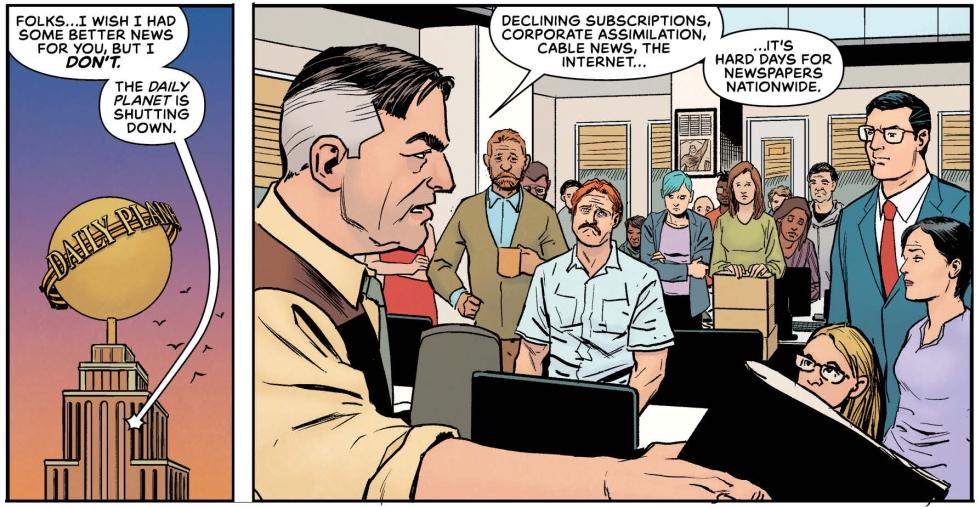 And apparently, Jimmy’s family connection to the Luthors gives him a claim to the Luthor family fortune. So, Jimmy makes a deal with Luthor: Lex saves the Daily Planet but foregoes any editorial control of the newspaper. In exchange,  Jimmy keeps their blood connection a secret and foregoes any claim on the Luthor money.

This introduces a major change at the Daily Planet, as we see Jimmy assuming the position of Publisher of the Planet, making him Perry’s “chief” now, as well as the rest of the Planet’s staff. Superman’s Pal is now also Superman’s Boss Jimmy Olsen.And Jimmy has made a personal enemy of Lex Luthor, which is likely to spell trouble for his

I find it fascinating how this series started with each issue being a series of seemingly unrelated and random vignettes centred around Jimmy to this final issue reading like a regular linear story. Matt Fraction has managed to take a number of disparate threads and weave them together into an intricate whole. Fraction’s story has a lot more depth than it’s humorous tone would lead you to expect.

There’s not much to complain about other than the problems associated with making this series jibe within current continuity. This series has incorporated a number of the sillier aspects of Silver Age Superman comics, especially Jimmy’s many bizarre physical transformations. Yet this series appears to be set in the current DCU continuity. So, are we to accept that all that Silver Age stuff is canon again? Of course, DCU continuity is still mostly up in the air until Dark Nights Death Metal concludes and re-establishes the continuity. So, who knows for sure what’s canon at the moment. 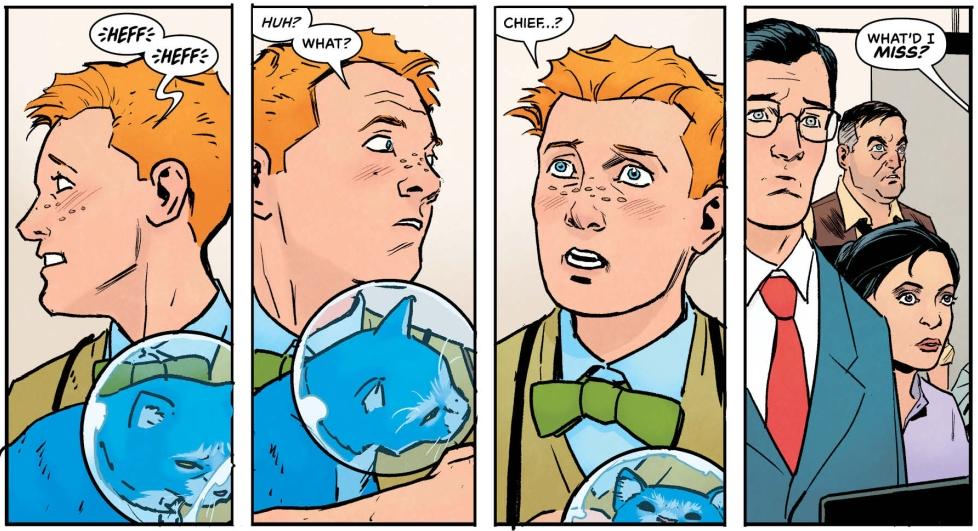 Superman’s Pal Jimmy Olsen #12 is an easy title to overlook. It mostly looks like a side story to the Superman books. It looks more like a comical diversion from the main titles, but it actually contains a well-written and surprisingly intricate story. I really didn’t know what to make of this series at first. However, I have really come to enjoy it the story played out. Also, Superman’s Pal Jimmy Olsen #12 actually introduces a major status quo change for the Daily Planet staff. If you haven’t been reading this series, I definitely recommend picking up the back issues or buying the eventual collected edition.

Doom Patrol Actress Says Season 2 Was Supposed To Have One More Episode, But Pandemic Closed Down Filming