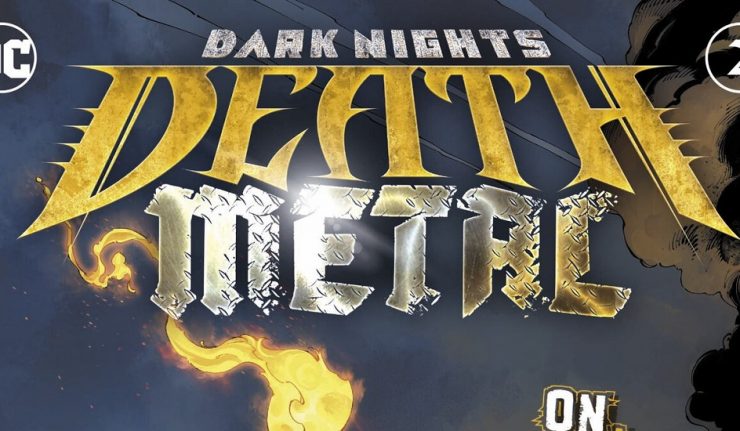 “Blue is for soldiers of morning. Of light. But me…I am no dawn.  No, you can call me The Darkest Knight!” – the villain formerly known as The Batman Who Laughs.

It’s the second issue of the Metal Encore! The legendary team behind Dark Nights: Metal and Batman: Last Knight on Earth take center stage and reunite for one last tour.
Get ready to scream! Wonder Woman roars across the horrifying Dark Multiverse landscape in the world’s most demented monster truck, with Swamp Thing riding shotgun! The two arrive at the ghoulish cemetery base of Batman and his army of zombies, but can the former friends stand each other long enough to form a plan and take back the planet? Plus, what’s Lobo doing in space? Don’t miss the second chapter of the wildest ride in the DC Universe, from the epic team of writer Scott Snyder and artist Greg Capullo!

First… Death Metal #2 has to be simply be read over and over again.  It’s that good, but it also has so many visual clues that Greg Capullo has subtlety placed in the frames that you need to take multiple drinks from this fountain!

Scott Snyder apparently is in charge of making things right.  Complaints from DC readers are rampant ranging back to Zero Hour.  What is DC doing with another “Control-Alt-Delete” of its comics?

However, the time seems right for the dream team of Snyder and Capullo to really put DC’s timeline back to “normal”.

Kudos to Capullo’s pencils and his renderings of Wonder Woman.  She is ageless and the true beacon of light in this comic.

Batman and his army of deceased hero zombies is simply incredible…starting with Jonah Hex.  But Bruce has reached way back to Uncle Sam, Liberty Belle, Sandman, and Dove.  Did I just see Black Canary in his mausoleum?

Snyder is leading the charge in getting all the DC characters back on the front burners.  Between him and the DCeased series, we are dusting off some great characters!

These versions of Batman… in all these different world…

The Batman Who Laughs brain is now in Dr. Midnight’s body.  Talk about scrambling the eggs.  Snyder is taking pivotal characters from a myriad of timelines and making DC timelines take a turn for either the better or worse.  It appears we are still in the Year of the Villain.  It may turn out to be the Decade of the Villain with all that is going on!

Capullo’s work on Spawn has provided us with The Darkest Knight.  I almost thought that it was an homage to a Bad Green Lantern.  But the appearance of The Darkest Knight (the villain formally known as The Batman Who Laughs) is pretty cool.

Okay – maybe this is not a negative, but an Atom that is a Batman in another universe… A Batom?  That’s funny!

A dad joke by Swamp Thing… maybe lazy writing, but Snyder dotes over his son on Twitter, so maybe an homage or two about that within this issue.

However, where is Lobo?  I get the cover art, but where is he?  Issue #1 teased the Main Man.  Where is Sgt. Rock?  He was the perfect narrator.

Ultimately, where is Superman?  I mean, two out of three ain’t bad.  But we need Supes.

Batmen who are weak and subservient?  This does not fare well.  How did a Batman from any universe become subservient to The Batman Who Laughs.  I mean I know there should be a pecking order of sorts, but these Batmen are not strong at all.  A transformer Batman?  A Dino-Bat?  And where is the Grim Knight?  He was perfect!

Robin King…. what was that whisper in TBWL’s ear?  What makes this Robin so intriguing?  This issue is the Swiss cheese of issues.  I have so many questions that need answers.

Again, these issue covers are really album covers!  So suitable for framing!

Capullo draws Wonder Woman.  That literally should be enough.  Dark Nights: Death Metal #2 is five stars, but it leaves a very different taste in your mouth.  I think Perpetua knows something we don’t know.  Fear is in the air, and I hope Clark is up there too!  We need Superman to make his appearance!