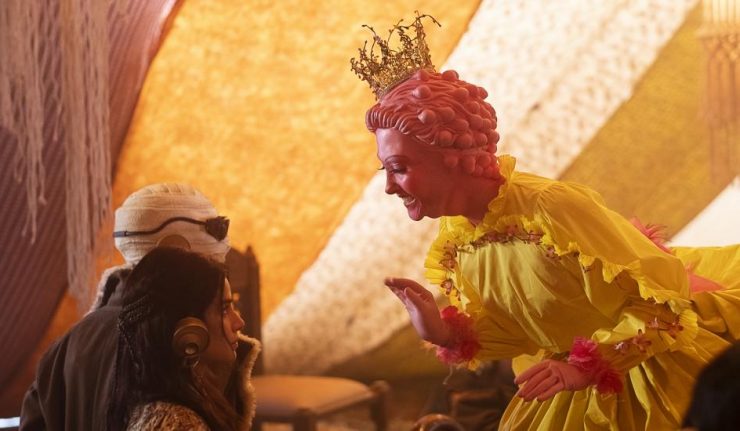 Doom Patrol 2×07 – “Dumb Patrol“: Miranda helps protect the Doom Patrol from some truly terrible ideas after a mysterious package arrives at Doom Manor. Rita’s visit to the Cloverton beekeeper leads her to confront her lingering mommy issues. While on his way back to the manor, Cliff ends up stuck on the side of the road – literally. Niles heads north to find Dorothy’s mother.

Doom Patrol episodes are usually an even mix of heart-tugging drama and absurdist humour. In last week’s “Space Patrol”, the episode leant a bit more into the serious side, but “Dumb Patrol” balances that out with heaping portions of silliness, most of which are pure brilliance.

The episode starts with Cliff falling through a billboard (The Chief pushed him out of a spaceship last episode). While there is somewhat funny in itself, the best jokes are in the billboard’s content. It advertises a book, written by the dinosaur half of Animal-Vegetable-Mineral Man, going by the name “Denise”. Apparently, Denise identifies as female. There are also some notable quotes praising the book, including a “Hell Yeah” from Kite Man.

Another quote is from Gerard Way. This is a nice shout out to a former writer of the Doom Patrol comic. Also, Way is the creator of Umbrella Academy, another comic adapted into a TV show which is in a similar vein to Doom Patrol. Way is also the creator of the Scants and their Queen, who serve as the villains of the episode.

But the most hilarious moment comes when the team encounters Beardhunter, and they ask him where Mr. Nobody is. Beardhunter replies, “Well, he got a gig on some animated bullcrap”, as a popup ad tells us, “Harley Quinn – All Episodes Now Streaming On DC Universe”. This is a reference to Alan Tudyk, the actor who plays Nobody, who also voices the Joker, Clayface, and other characters in the Harley Quinn cartoon.

Also, the plot of the episode has Larry, Vic, and Roni under the influence of Scants, which make them behave stupidly. This results in them making a chain of humorously bad decisions. And then there is the cheesy slide presentation which explains the threat of the Scants. Despite this being a laughably outdated method of conveying information, it does provide an entertaining way of delivering exposition.

Even though “Dumb Patrol” leans heavily into comedy, there is still plenty of drama to be seen in this episode. Crazy Jane has been supplanted by Miranda as the primary identity. She makes a good first impression on the team by showing off her cooking skills. And she also proves invaluable by being immune to the dumbing-down effects of the Scants. But why is she immune, yet Flit isn’t?

And in the Underground, Jane finds that Scarlet Harlot is missing, with her station closed. A lot of Jane’s personalities are disappearing. Is her fractured self healing, or is something more sinister going on? My money’s on the latter, and I suspect it has something to do with Miranda’s return.

Rita meets the beekeeper that she is portraying on stage, opening up to her about her unresolved feelings towards her mother. The beekeeper suggests Rita seek catharsis by yelling at her bees in lieu of her long dead mother, which unfortunately provides no release. But Rita does find some satisfaction when she stops a mugging. Perhaps the key to Rita’s happiness might lie in crimefighting.

And the Chief travels to the Yukon to seek out the mother of his child. Instead, he has a vision in which he is confronted by the Candlemaker. In the aftermath, he summons Willoughby Kipling who agrees to take care of an unspecified task. However, Niles practically begs for “one more day” before Kipling does so. It’s unclear what exactly they are referring to, but the general tone is ominous. This leads into the end credits, which seem particularly foreboding due to the omission of the usual ending music. This omission is an effective if disquieting indication that dark times lie ahead for the team.

This episode was near perfection from start to finish. However, I can sympathize with Roni when she shows her disappointment at Mr. Nobody’s absence. I too wish he could have made an appearance. But at least we a hilarious jab at the fourth wall.

“Dumb Patrol” is a perfect example of why I love this series so much. It the ideal blend of superheroics and silliness. DC has had a lot of successes with their TV offerings in the last few years, but Doom Patrol tops the lot.