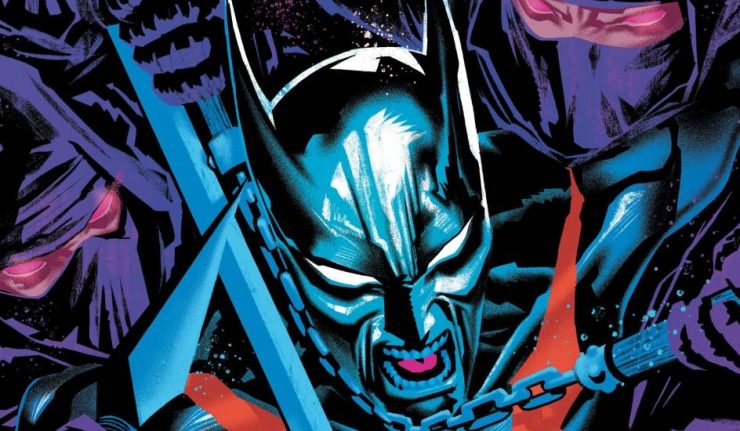 Batman Beyond #45: Batman Beyond and Damian Wayne are going to have to join forces in order to stop Mr. Zero and his radical faction from turning Gotham City into an ice-covered hellscape. Damian will have to put his disrespect for the “pretender” that is Batman Beyond aside if they’re going to stop this mutual foe-and even then Mr. Zero’s power and influence might prove too much for this pair!

In Batman Beyond #45, Damian reveals more information about who Mr. Zero is and what his plan is. While the League of Assassins was still under control of Ra’s Al Ghul, Zero put forward a solution to mankind’s despoilment of the Earth. In Zero’s own words, “I have the perfect solutin. We must construct a fleet of cruisers. Then we will take a select few into space while a new ice age purifies Earth. Once Earth is restored to its original glory, we will return to repopulate the world in a controlled manner”. When Damian later tried to scrap the project, Zero led a revolt and took control of the League.

When we were first introduced to Mr. Zero, I thought that the choice of name was a nice nod to Mr. Freeze’s original name in the comics. However, the reference seemed a bit oblique, as Zero didn’t appear to be a cold-based villain. Now that we know he’s trying to cause an ice age, the reference is much clearer.

I like that Jurgens has chosen this way to introduce a new villain to the Batman Beyond mythos. There is this nice connection through the name, but Zero is not a retread of Mr. Freeze. Jurgens hasn’t just made a futuristic clone of Mr. Freeze, slapped a similar name on him and called it a day. He has introduced a new villain with different a motivation and modus operandi.

Elainna Grayson returns, sporting her new Batwoman uniform. It’s very much like Terry’s suit with blue replacing the red elements. With this colour swap, Elainna’s costume clearly evokes the Nightwing costume, which I find particularly. This is particularly fitting, considering that Elainna is the daughter of Dick Grayson. There are also some other differences beyond the colour scheme to differentiate her costume from Terry’s – most notably, Batwoman has much larger eye slits on the cowl. Overall, I quite like this design.

We also get to see a nice moment between Dick and Damian, who were once Batman and Robin. They join Terry and Elainna against Zero’s forces. The four fighting together make an impressive team. As Matt comments, “This is like, so schway! Like a real Batcrew”.

With all this recent expansion of the Bat-Family, it would be nice if Matt was to return as Terry’s Robin as well. Just saying.

While many of DC’s titles are great reads most of the time, Batman Beyond manages to maintain a high quality. Jurgens has managed to take a property that I only sort of liked and make it into one of my favourite titles. If you’re not reading this title, I urge you to give it a look.