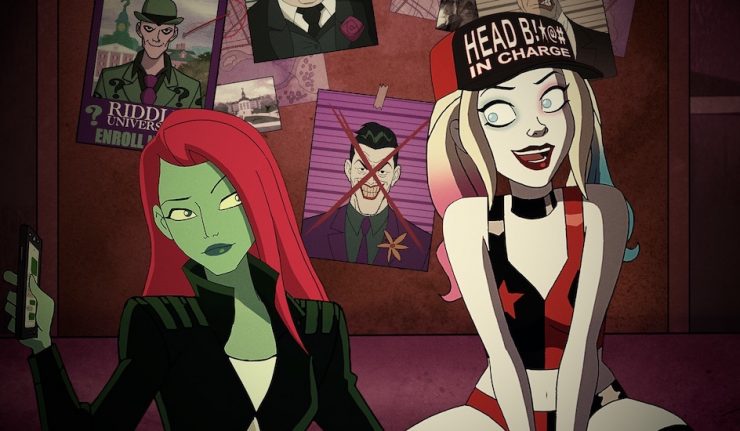 Discussing how she and her writing partner Elyssa Samsel started working on the new beloved show Central Park, Kate Anderson started off by saying, “Writing for animation has been a good fit for us because anything is possible. We were both living in Brooklyn and hoping that something would happen magically. Josh reached out on Instagram and was like ‘Hey, can I talk to you guys about something?’ We were immediately super intrigued. He said they were creating this animated series and asked if we would be interested. We never thought someone would call and say, ‘Hey, do you want your dream job?'” Elyssa continued sharing a fun easter egg from the project: “The main character Bertie, is a busker in Central Park played by Josh Gad. I actually used to busk myself with my violin in Central Park so anytime you hear in the score or in the song you hear him playing violin, it’s actually me on the same violin I used to play in Central Park. Also, Kate is an incredible singer so if you listen carefully, you can hear her doing backups. This was really a dream project in so many ways.”

Discussing his love for music in both orchestration and composer, Tim Davies stated, “I like playing with notes. Anything I can do with music, especially live orchestras, is my favorite thing to do. Orchestrating is always with other people, whereas composing is more with just yourself. The composer writes the music and gets through the process. Orchestration is the after the process that can be possible from some abstract scores. The orchestra is my favorite instrument.”

Fusing hip-hop into such an iconic franchise, Sebastian Evans shared his work on Teenage Mutant Ninja Turtles: “I’m a fan doing a dream job. I wanted to add the true ninja sound behind the Teenage Music Ninja Turtles. I wanted to insert that along with the hip-hop vibe and create an homage to all the past versions.” Sebastian continued, reflecting on the comparison between orchestral and hip-hop scores. “I don’t feel like it is different comparing orchestra from hip-hop music. The essence is the same. Putting hip-hop throughout TMNT felt right, because it draws from underground elements of hip-hop just like the Turtles. It doesn’t skip the orchestral elements either though. I love putting easter eggs in the score and often used different iterations of Turtles.”

Jefferson Friedman began to discuss the role of diverse perspectives within his work, “For me as a white cis-male, I always try to hire women or minorities. For Harley Quinn, one of the major plotlines is a ‘will they or won’t they’ between Harley Quinn and Poison Ivy. For LGBT+ youth, it is considered the most important storyline. There is a big kiss at one point in an episode. I see it as an allegory for how hard it is to come out since they are hanging from a vine over a pit. When the episode came out, that moment helped so many people and made people’s lives that much better. Whenever you have the opportunity to contribute to a story that is more diverse and better for other people, it is what we strive for.”

Adding to this conversation, Roger Neill said, “As composers, we’re independent contractors, we have choices on who we can hire and who we can work for or with. In my case, I’m very proud and happy that I get to work with directors who are women. The idea of trying to break into the industry is so daunting. One thing I like to say is you didn’t get your break by somebody you’re going to meet one day but somebody you likely know now.”

Moderators Keith David and Alan Tudyk, fans themselves of music in animation, led the lively and fun discussion. Virtual Comic-Con attendees laughed and learned, as they gained understanding about the different musical components of some of their favorite projects, along with the important role of diverse perspectives in entertainment.

You can watch the full Music in Animation panel below: