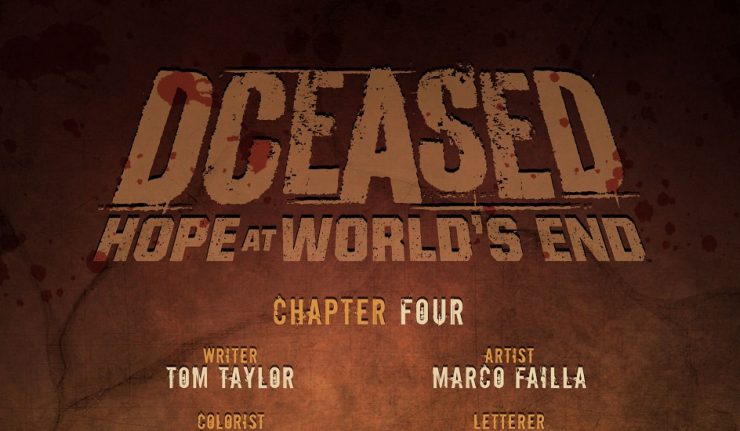 “It’s just that if I put on his suit…it means he’s really gone.” – Damian Wayne

The world needs a Batman but Damian is struggling with the enormity of the mantle…can the Man of Steel help? And seeking safe haven, Suicide Squad’s Wink and The Aerie reach the fortress of Jotunheim…but is anywhere left on Earth safe from the unliving?!

In DCeased: Hope at Worlds End #4, we find Wink and The Aerie en flight for three days seeking refuge and not daring to land.

Tom Taylor provides in this digital issue #4 a glimpse of how desperate the world has become.  While Razza Katuah and the Manticore do not want anyone to enter their mountain top refuge, Wink makes it understood in no uncertain terms, that she could have transported all of them into the virus epicenter.  So….let’s all get along!

Taylor swirls different combinations of heroes, villains, and deals accordingly with the aftermath of Batman’s demise.

After having glimpsed at Issue #5, Taylor is playing the long game with some of Damian’s questions.  “Is the Jet still here?” referring to Wonder Woman’s Invisible Jet.  He has an agenda of finding his mother, but that is to be revealed later.

And he is also dealing with the passing of the Mantle of the Bat as Bruce, Dick, and Tim have all succumbed to the Anti-Life virus.

Superman to the rescue.  Damian is as astute as his father was in this universe.  He shows concern for Clark and an admiration for Jonathan Kent.  And Clark displays his servant leadership by providing Alfred (sigh…I miss Alfred) some Earl Grey tea as well as providing a reassurance to Damian that he is ready to be Batman.  Taylor’s writing is strong!!!

Marco Failla has clean pencils.  The art is so sharp and the attention to detail is simplistic but thorough.  Such a clean issue!!!

This is a turning of the page as well as providing the rumbling of how we got to Dead Planet #1.

I continue to sing Tom Taylor’s praises as he could have stopped with the 2019 DCeased.  But he is as strong as creating his “Taylorverse” as Sean Murphy has with his White Knight “Murphyverse”.   I hope this series continues as there are too many great stories within Taylor’s DCeased World!