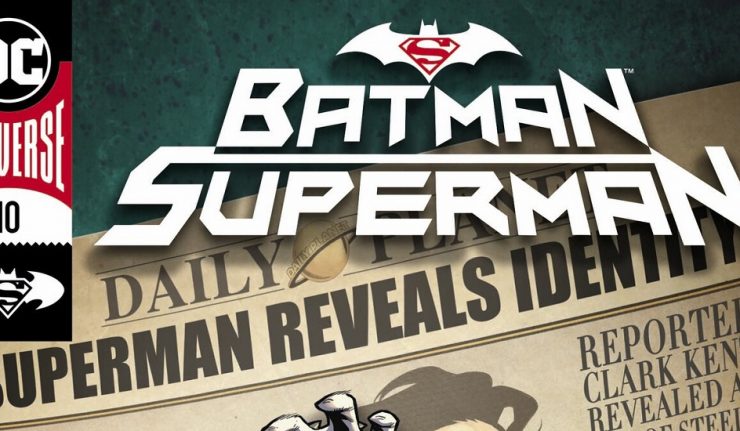 “Breaking and Entering is not in my skill set” – Superman
“Relax…I own it.” – Batman
“Of course you do.” – Superman

Batman/Superman #10 – Devastation in Gotham City! Following the events of a massive explosion in midtown, Batman and Superman pick up the pieces to learn who rigged the Atomic Skull like a bomb…and will they do it again? All will be revealed as the horrific plan of the Ultra-Humanite rains terror down on the lives of the Dark Knight and the Man of Steel!

Geesh – as soon as we get the Ultra-Humanite back in an imposing way, Joshua Williamson blows him up.  And I might add, the Atomic Skull bought the farm in the last issue.

Williamson is taking a key from Scott Snyder’s Grim Knight who would go and retrieve other time line’s Bruce Waynes and kill them.  I hope Williamson is not reaching back into the villain vault just to clean it up.  DC has been doing a great job of providing us some old favorites.  Don’t stop now.

Williamson really is in tune with the nuances of Clark and Bruce’s relationship.  In this issue, Bruce is softer on Clark in recognizing that Clark takes on all the problems of the world no matter how large or small.

Clark has a great sense of humor under Williamson slipping in one-liners much like a seasoned Robin of the 1980’s.

Clayton Henry and Alejandro Sanchez  are a one-two punch in artist and colorist as their renditions of Batman and Superman are super clean.  Their depictions of a more slender and sleek Bruce and Clark are fresh and the environments they draw are not busy, but refreshing.  Whether the Batcave or Metropolis, their renderings are like looking through a clean lens.

Given how this book started and how intertwined it was with The Batman Who Laughs, we now have it back to where it appears to operate outside of the typical timeline of the DC Universe.

There is no recognition of Bruce losing billions in the Joker War that is raging nor is there evidence that Clark is battling the Red Cloud right now.  I enjoyed the seeds of continuity that this series began with, but it has gone off in its own direction – good or bad.

Batman/Superman #10 – Ultra-Humanite’s gorilla body bites the dust.  Or does it?  We can’t be going into the toy closet only to let the family pet destroy our antiques.  Come on DC…let’s keep all of our action figures in pristine condition!