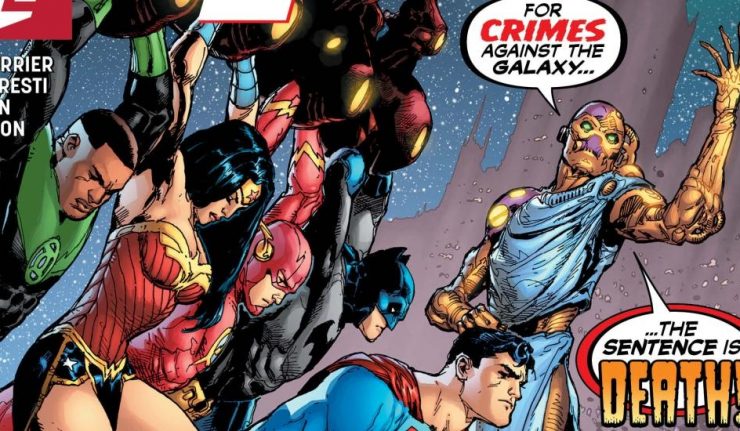 Justice League #50: Special extra-size anniversary issue! It’s the final chapter of “The Rule of War”-and all the rules are broken! On the alien planet Trotha, Empress Siddinx’s plan is revealed, and it’s nothing short of world domination-with the Justice League entangled in her puppet strings. But how can the team save a population that now hates and fears them?

In Justice League #50, the team is still stuck ruling a planet after deposing it’s despotic leader. This is due to the planet’s denizens are unwilling and unable to rule themselves. However, they now find their popularity as rulers waning. While fighting off an invading force, Wonder Woman makes a statement that sounds bad out of context. Unfortunately, someone has been circulating her words without any context.

I had wondered how the League could hang around this planet for so long, given that they all have other commitments. Surely, some other emergency would have surfaced that would require their presence more than than Trotha does. While Spurrier doesn’t answer this question, at least he acknowledges it. Batman makes the point” It’s taking too long. What’s happening in Gotham? How many lives could we have saved on Earth while we’re busy failing to calm things out here?”.

I also had wondered about the story of the giantess Ischyria that Diana had related. Her name translates to “a stoppage or reduction in the flow of urine”, which seems an odd name, but could be attributed to the writer not knowing enough Greek to notice. However, Diana reveals that she made the story up. I believe that Spurrier gave the character a scatological name as a hint that Diana’s story was bullcrap.

Spurrier’s story does provide a satisfying and somewhat believable resolution. The key to breaking down the barrier between the two opposing factions is to teach the children the truth about their society. Siddinix had not yet fully conditioned The Trothan children with her lies, allowing Diana to convince them of the truth.

The story ends with the Trothans stepping up to take on the responsibility of self-rule, allowing the League to return to their regular lives away from Trotha. Diana finishes the Ischyria, which ends with the moral of her story, which is also the moral of Spurrier’s Justice League story: “…heroes lead by example. Not by command”.

While Spurrier produces a satisfying and fitting end for this Justice League story arc, I can’t help feeling that the story seems somewhat inconsequential for a landmark issue. While this story is an interesting diversion from the universe-shattering threats the League usually deals with, is it really worthy of featuring in a double-sized 50th issue? A landmark issue should mark an important milestone, while this story seems like more of a filler story that serves as a placeholder between more notable stories.

This isn’t to say it wasn’t an enjoyable or well-written as a Justice League story. It’s just that it seems somewhat underwhelming as an anniversary story.

Justice League #50 does seem a bit disappointing as a landmark issue, However, it does provide a satisfying conclusion to an interesting and thoughtful story arc. Spurrier is departing the title, but I would love to see Spurrier return to see how he would tackle a more conventional Justice League story.