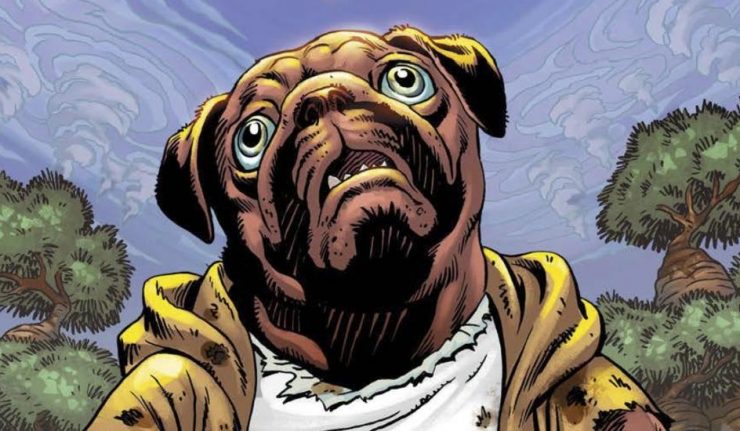 Captain Ginger Season Two #5: Threatened with doom from the sky, the cats and dogs band together in a desperate quest for survival. But can even Captain Ginger keep this fragile alliance together? And will his starship ever fly again?

Captain Ginger Season Two #5 sees the cats reunited with their commander, Captain Ginger. However this reunion comes at a cost. Two of the dogs, Stroker and Erwin come to blows, and in the fight that follows, they knock Sergeant Mittens into Treever, the dogs’ leader, which kills him. Some of the dogs hold Mittens to blame, the dogs and cats decide that the priority is to return to the ship.

At the cats’ ship, they find that Ramscoop has survived the crash and has been working on repairing it. Unfortunately, Ecru has stolen the central A.I. module, making their matter replication device useless. However, they have barely time to react to this before learning that the Lumen have returned to resume their attack.

This leaves things looking pretty bleak for the cats. Their alliance with the dogs is frayed almost to the breaking point, their ship is disabled, their food source is missing a vital component, and a powerful alien species is about to strike. It will be interesting to see how they can escape from their predicament.

We also find out a bit more about the dogs’ history. They refer to themselves as the “Children of Rowena” who was apparently the human that created their species from ordinary dogs. This story seems very similar to the story that the cats have of their species’ orgins. It seems quite likely that the two stories might be intertwined. If so, perhaps the two species are destined to share a common future as well.

In recent months, Ahoy Comics has made the decision to make Captain Ginger Season Two a digital-only title. This is unfortunate for readers who prefer to read physical comics rather than digital releases. If you must have a physical copy, you will need to wait for the trade paperback collection, but it’s definitely worth picking up digitally in the meantime.

Captain Ginger Season Two #5 is another great issue in this series that tugs at both the hear and the funny bone of any comic reader who is also an animal lover. If you like science fiction stories that are a bit different from the standard comic book fare, then I urge you to give Captain Ginger a try.