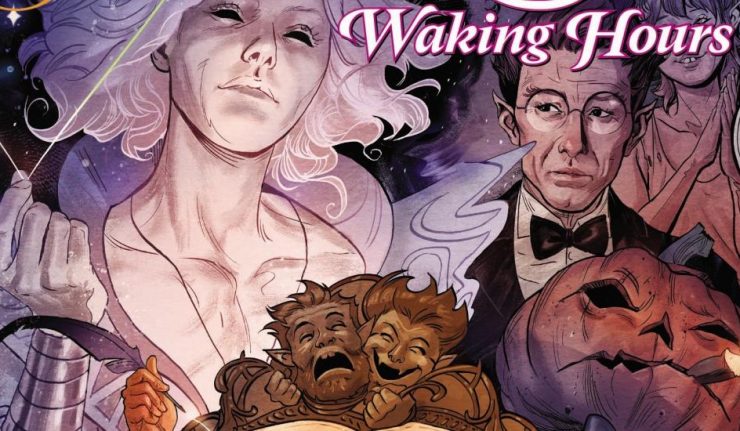 The Dreaming: Waking Hours #1: A new chapter in the Sandman saga begins with an all-new miniseries populated by faces both familiar and new! One of Dream’s heaviest responsibilities is the creation of nightmares-the beings that haunt our sleep and turn our thoughts toward darkness. In the form of Ruin, the nightmare of catastrophic failure, Dream was certain he’d built his next masterpiece…but Ruin can’t help but live up to his name, sending every situation into a spiral of unexpected consequences. Unfortunately, Shakespearean scholar (and exhausted new mother) Lindy has dreamed of Ruin…and in the process, she’s delivered him unto the waking world!

The Dreaming: Waking Hours #1 serves as an introduction to a number of new characters. Most notably, is the nightmare known as Ruin, who seems likely to be the title’s central character. While first appearances can be deceiving, he seems a likable enough character, who is a bit of a screwup. Another character, Jophiel, declares, “The most mediocre nightmare in the Dreaming has f-ed up? What a shocking development. Have you ever managed to do something right Ruin?”.

And Ruin has royally screwed up in this issue. In an effort to escape the Dreaming by slipping out with a waking dreamer, Ruin instead manages to change places with her. Not only does confinement in the Dreaming endanger Lindy Morris’ life, but her baby daughter is left in the care of Ruin.

Lindy is a Shakespearean scholar exploring the various theories around the true authorship of his work. Thus, I found it intriguing that she find herself trapped in a dream with Shakespeare, and the other figures that have been postulated to have written under his name. I half expected Sir Francis Bacon to make an appearance as well.

I do wonder if the Shakespeare we see hear is the “real” Shakespeare as seen in the original Sandman series. Other real world beings have ended up living on in the dreaming before. Most notably, Matthew the Raven, who originally appeared as Matthew Cable, a supporting cast member in Swamp Thing.

We do also see some more familiar denizens of the Dreaming, as Lucien the Librarian discovers that something has escaped from the Box of Nightmares. He then reports this to Lord Dream of the Endless. Dream declares, “I know which nightmare is missing. And it did not escape. Nothing escapes the Box. It was set loose”. Apparently someone deliberately acted to free Ruin. But who would do so and what were they seeking to accomplish by this? This is an intriguing mystery.

There aren’t any clear problems with The Dreaming: Waking Hours #1. With this being only the first issue, we only have a brief introduction to the story and characters. However, this issue gives us an intriguing introduction to G. Willow Wilson’s new characters and the situation she has crafted for them. This introduction is enough to encourage readers to come back next month to learn more. What more could you ask of a first issue?

The Sandman: Waking Hours #1 serves as a good introduction to G. Willow Wilson’s take on Neil Gaiman’s classic characters and setting. Based on this first issue, I have little doubt that Wilson will provide us a great story that is a worthy continuation of Gaiman’s classic Sandman epic.