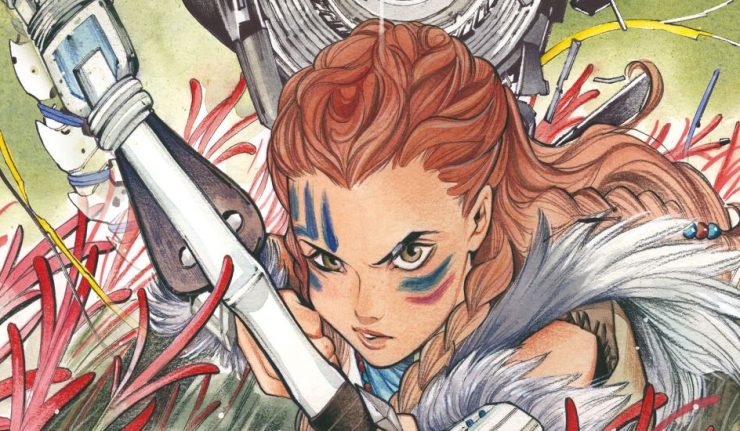 A thousand years after a global cataclysm, Earth has been remade into a lush, thriving ecosystem, but with a new dominant species: the machines. These massive, animal-like robots fill the lands, oceans, and skies, serving as the guardians and enforcers of the revived natural order. New generations of humans live on in pre-industrial tribes, without knowledge of the doomed civilization that preceded them, that of the “Old Ones”-us.

Horizon: Zero Dawn #1, has, simply put, some stunning visuals. There are several alternate covers, each one more beautiful than the last. The pages have big panels and the colors are vibrant. I really like the attention to detail on the human characters. Each set of clothes gives us insight into how that person lives. What really shines is Ann Maulina’s creature design. It is easy to say “robot dinosaurs” and walk away with something out of The Transformers. Instead, what we get here is intricate, frightening, monsters who, based on the backstory, might actually be the heroes not the villains.

Speaking of who the heroes are in this story: Anne Toole has really gone out of her way to show us a world that may not be exactly what we think. It seems like humanity have done some pretty terrible things to the Earth and these robots have fixed that. Hmmm. Of course, human readers want to see human heroes, but it is much more complicated than that. I appreciate this kind of story telling. I like our two protagonists. They have good chemistry when on the page together. It will be fun to get to know them as this series progresses.

Horizon: Zero Dawn #1 plops the readers into a world that already exists. In order to do that, there needs to be explanation. The Toole decides to do this with some voice over, exposition. It works fine because then we don’t have to have on character be exposition woman. Still, I would have liked to see her go the full Kafka and just let us figure it out as the series plays out. It is a small nit to pick in what looks like a really insightful series.

Horizon: Zero Dawn #1 has a ton of promise. The premise is solid. The characterization is intriguing. The art is detailed. The coloring is eye popping. I look forward to seeing where this is going. A commentary on humanity vs machines in a world where machines actually saved the world is very clever.