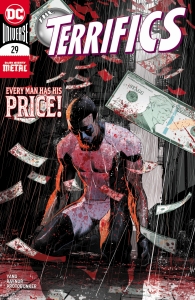 The Terrifics #29: Simon Stagg is dead, but don’t worry-prodigal son Sebastian has arrived to take his place as his rich, evil father’s successor. Sweet daughter Sapphire and her friends the Terrifics are not about to let that happen. It’s a winner-take-all blood feud for all the technology, money, and power in Gateway City, and things are about to turn even deadlier!

In the wake of Simon Stagg’s death, a man claiming to be his son Sebastian appeared at his funeral. In The Terrifics #29, Sapphire confirms that she did indeed have a brother and relates the story of how Simon had disowned Sebastian. Although Sapphire is suspicious of him at first, he manages to convince her that he really is her long lost brother.

Sebastian had attempted to poison Simon – or so it seemed. He claims to have been framed. Also, the younger Sebastian that Sapphire remembers seems rather more likable to the grown man claiming to be him. I wonder if he’s actually an impostor or if his time in Gotham City has corrupted him. 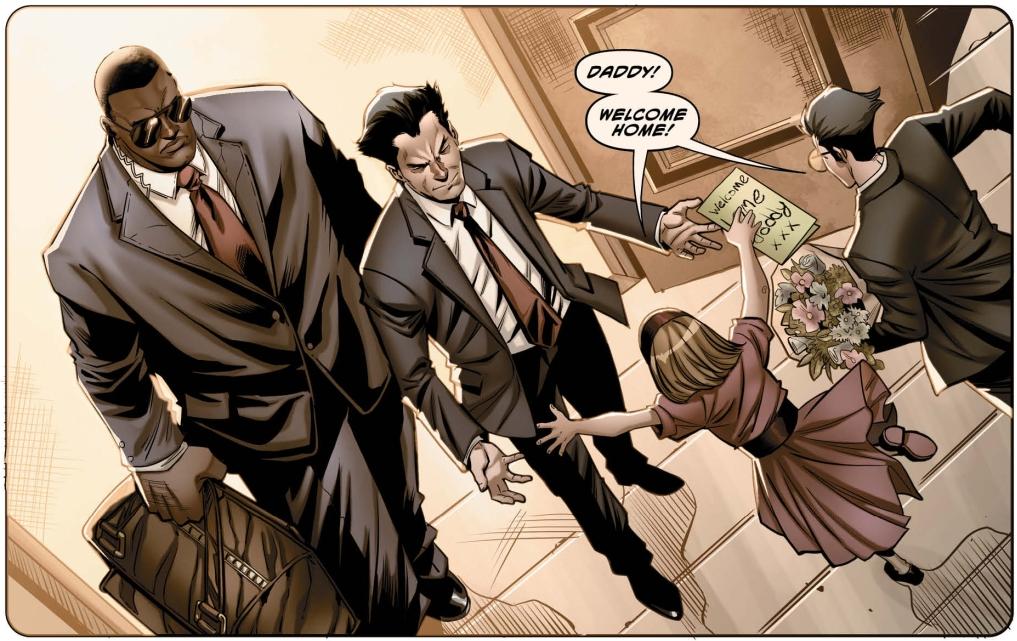 It also seems that Silas Stone has defected from Mister Terrific’s T-Council to side with Sebastian. While Silas and Michael have had a somewhat antagonistic relationship, Silas has never actually been evil. It could be that he’s joined the villains to save his own skin, but I suspect that he’s pretending to have switched sides in an attempt to take them down himself.

It seems to be becoming clearer that the T-Council is meant to be an extension of the Terrifics rather than a separate team. In this issue, Michael appears to be referring to the founding four members plus the T-Council as the Terrifics. This makes me wonder what the long term future of the team is likely to be, but with the series ending next issue, that may be a moot point.

Sebastian Stagg has enlisted the aid of alien bounty hunter Lobo to defeat the Terrifics. Ugh. I really don’t like Lobo and I wish he hadn’t been included as in this story. Oh well, hopefully I’ll get to see him take a beating next month in the final issue. However, Lobo’s inclusion is the only thing that I didn’t like abut The Terrifics #29.

Plus, as I’ve stated in my review of last issue, this title has gone digital only. This will be an annoyance to those who prefer to buy print copies of the individual issues. These readers will have to switch to digital or wait for the eventual trade paperback collection.

The Terrifics #29 is the penultimate issue of this title. It’s a shame that it didn’t find the wider audience it deserves, but perhaps when the comic industry stabilizes again, Yang, Lemire, or some other talented writer will be given the opportunity to revive the title. In the meantime, I’m sure Yang has a satisfying blowout issue planned for next month.