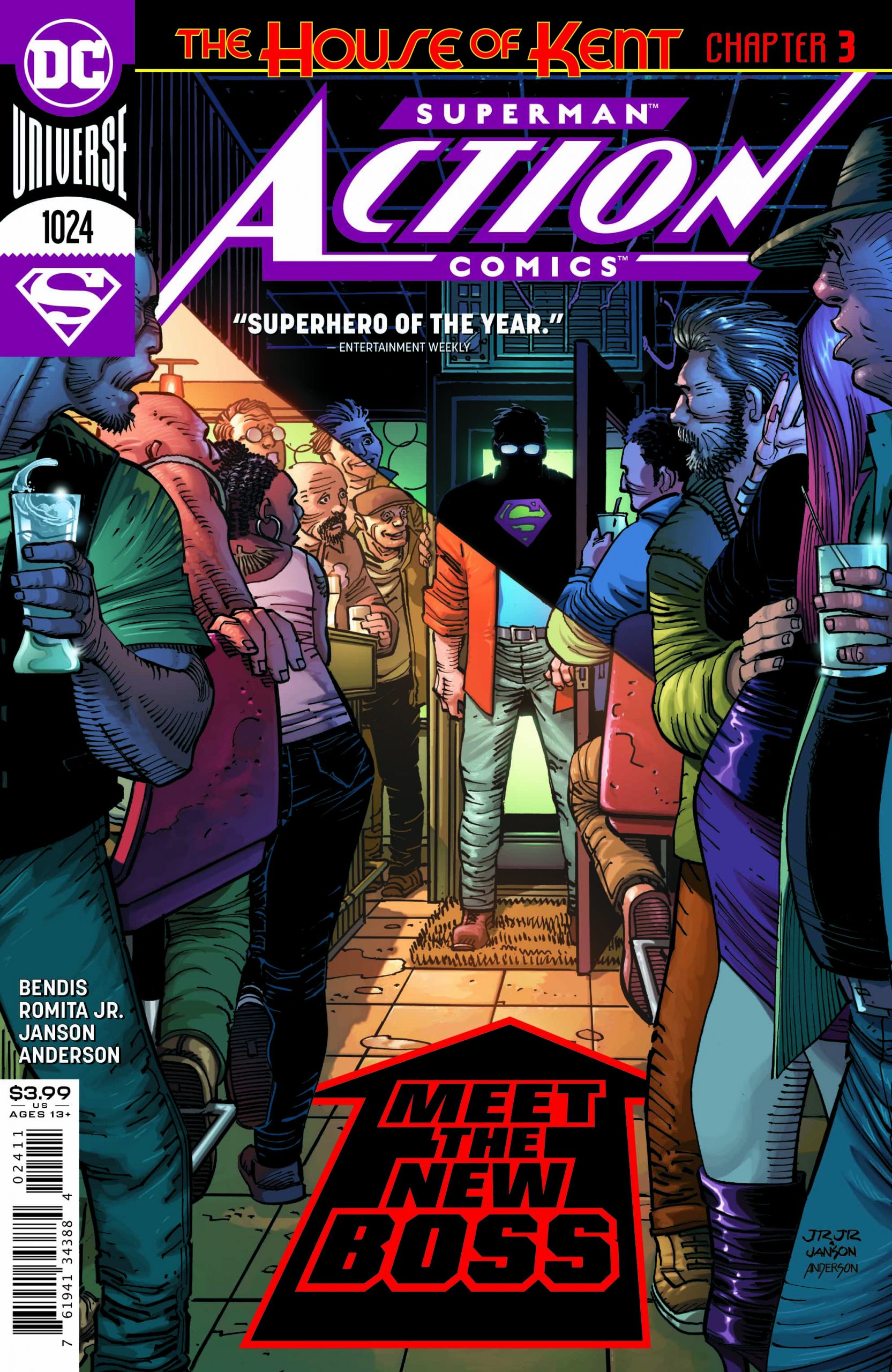 As the F.B.I. descends on the Daily Planet, Superman, the Superboy’s and Brainiac 5 follow the trail to the Invisible Mafia.  But, their lead comes at a price, the death of one of Superman’s newest allies.

The idea of the Invisible Mafia remains the strongest element of Bendis’s two-year tenure on Superman.  This issue moves things a little bit forward.  Marisol Leone continues to always seem to have a surprise up her sleeve.  And, in Action Comics #1024, it’s the final page (again!  See Action Comics #1006) that promises something more exciting to come.  Hopefully, it comes next issue and not two years down the line.

Despite the long wait for this plot line to come closer to fruition, the nuts and bolts of it remain intriguing.  Additionally, there are a few bits throughout Action Comics #1024 that are interesting.  One can’t tell at this point if they will develop into something substantial or if they are just a throw away line here and there.  When Leone’s people can’t identify Brainiac 5 the recommendation is to check the “multiverse database.”  Now, we’ve already seen allusions to a multiversal connection for Leone so one wonders is that just another example of that or if it is supposed to tease something about this Brainiac 5 and the Legion of Super-Heroes from which he hails.  Leone’s people also have no information on Conner Kent, and as it was discussed last issue, he’s from an alternate timeline/hidden timeline from the main characters as he’s only remembered by Clark’s recently-returned-from-the-dead parents.

Melody Moore was introduced back in The Man of Steel Vol. 2,  #1.  As one of the new characters that Brian Michael Bendis introduced into the Superman cast, readers expected to see have a substantial role.  As the Deputy Fire Chief, she was either going to be the surprise reveal as the Red Cloud (which she wasn’t) or an ally of Superman.  There was even the slightest suggestion that there was an attraction between the two.  After she seemed forgotten for a number of issues, she popped up just before Superman’s identity reveal (wonder what happened off panel!) to tell Superman she was going to run for mayor.  All that ends in Action Comics #1024 as Bendis fridges her.  That’s right! She’s killed unceremoniously solely to give Superman something to be upset about and force him and his “family” to make the Invisible Mafia a priority.  For those unfamiliar with the notion of “fridging,” please check out Gail Simone’s blog on the subject….“Women in Refrigerators.”

Now if there’s one thing Bendis knows how to do is to discard a character’s potential.  We’ve all seen the incredibly fresh and different idea of Superman and Lois raising a son discarded in favor of aging Jon Kent up to yet another teenage Superboy.  We’ve never seen that before….  Along with making the same mistake with Melody, he cheapens it even more by making her death completely devoid of meaning in the story.  It’s not even clear why she’s the victim.  She doesn’t go down fighting, she doesn’t go down heroically.  She just goes down quickly.  While Superman is duly upset, it comes across over the top for someone he barely knew.  With just a handful of appearances, Superman had very little time to really get to know her, or be as upset as he seems to be.  But, it’s just another example of Bendis telling and not showing.  This was also seen when Superman stupidly decided to reveal his identity.  Bendis told us, but he didn’t show us.  There’s just a complete lack of depth to the characters in these stories. Perhaps, we’ll get a Melody Moore tribute issue written by someone else…I mean Marc Andreyko did all the heavy lifting for Bendis’s destruction of Krypton storyline over in Supergirl.

Once again, the Invisible Mafia proves to be the best aspect of Bendis’s run on Superman and Action Comics.  The idea of the Invisible Mafia and the mystery surrounding Leone are very compelling, and they maintain their significance long after they seemed forgotten nearly two years ago.  The other aspects of this issue, especially the Death of Melody Moore, reveal all of Bendis’s shortcomings as a writer.  Lacking any real substance or depth, the execution of this storyline is not only disappointing, it’s downright bad.  You can almost feel Bendis checking off the boxes of his plot development as he forgets all the heart and real meaning….