Review: The Question: The Deaths Of Vic Sage #4

Review: THE QUESTION: THE DEATHS OF VIC SAGE #4 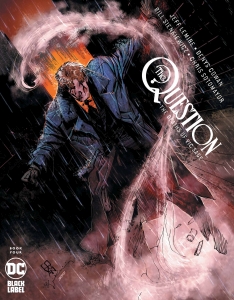 The Question: The Deaths Of Vic Sage #4: Vic Sage is back in Hub City after experiencing a dizzying rush of all his past lives…but is he too late to save his present home from the evil that so far has never failed to end his story in tragedy? If Hub City is going to live, does Vic Sage have to die?

The Question: The Deaths Of Vic Sage #4 brings the series to its conclusion, as The Question faces down the Man With A Thousand Faces in modern day Hub City. The face his foe currently wears is Holden Malik, but he’s something much darker. Vic’s visions of previous lives have revealed that Malick is literally Evil incarnate and Vic has been locked in an eternal struggle spanning several lives. The Question is whether or not Vic can break free from the cycle or die again, having to return in a future life.

I found the exchange between Vic and Tot raises some interesting questions. Tot takes offence to Vic’s claims that a supernatural evil is behind Hub City’s current problems, instead attributing them to human nature. Aristotle Rodor represents science and reason, while Richard Dragon represents a mystical world view.

However, Tot is also a pragmatist, and instead of wasting time on convincing Vic to take the rational view, he convinces Vic to take to the air and attempt to calm the populace. Then Vic can have his confrontation with Malick.

Vic also makes the surprising move of revealing that he is the Question on air, revealing his secret identity. This makes me what the repercussions will be for future Question stories. As a Black Label title, it’s unclear whether this story is set in the DCU or in its own separate continuity. If it’s outside of the DCU, it shouldn’t have any bearing on Vic’s future appearances in the DCU.

I also find it interesting that Both Vic and Tot are right about the nature of the evil present in Hub City. Malick reveals his true nature to Myra, demonstrating that his supernatural nature is not merely a delusion in the mind of Vic. But, even though Vic apparently triumphs over Malick, it turns out not to be the final victory he expected.

Vic tells Tot, “I ended it, Tot. I ended evil”. But he discovers that the evil lives on, living in the citizens of Hub City, as Tot explains, “I told you, boy. There is no ‘devil’. Just us. Just people”. Vic’s victory over Malick isn’t as conclusive as expected. Their conflict will continue as long as evil exists in the human heart.

Another interesting facet of this book, is its relevancy to current events. The violence in Hub City is taking the form of conflicts between protestors and Hub City’s police. Many of the protestors are depicted wearing face masks and bearing signs with the abbreviation “BLM”. Also, the cops are depicted with their faces concealed and no identifying markings on their uniforms. This is clearly a confrontation between Black Lives Matter protestors and government secret police.

As far as I am aware, this is the first instance of the protests and the Pandemic being referred to in a comic book – at least in a DC Comic. If this series is indeed canon, that means these real world events are being reflected in the DCU. But as I stated above, the canonicity of this series isn’t exactly clear.

I was also pleased to see that a tribute to Dennis O’Neil was included in the back of The Deaths Of Vic Sage #4. Denny O’Neil, who recently passed away, wrote DC’s first volume of The Question in the late 80s, and this series heavily drew on O’Neil’s series. Each of this title’s creators writes their own tribute to O’Neil. Jeff Lemire talks of being inspired by his predecessor as the character’s writer, while Denys Cowan and Bill Sienkiewicz reminisce about working with him on that earlier title. This was a fitting and touching tribute to Dennis O’Neil and it’s fitting to include it in an issue of The Question.

I could complain about the uncertainty of whether this book is considered part of DCU continuity or not. But whether it is or not, I’d love to see the story continued. The ending makes it clear that Vic’s story is far from over. What truly disappoints me is that DC has not declared any definite plans to feature the character in the near future. I’d love to see another Question ongoing series.

The Question: The Deaths Of Vic Sage #4 was a pure pleasure to read. Not only is this story topical, but it delivers one of the best stories I’ve read this year. I’m sure that Denny would be proud at how Lemire, Cowan, and Sienkiewicz have carried on the legacy of his classic Question series.