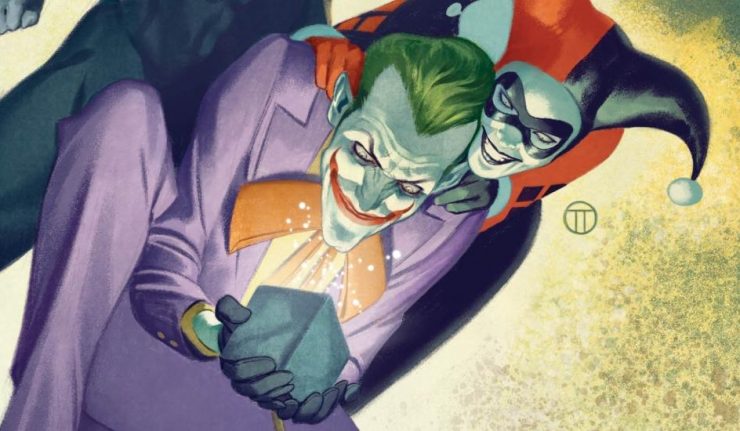 Injustice: Year Zero #5: Superman and Lois discuss their legacy and the possibility of it. Meanwhile, Joker and Harley convince Black Manta to help them get a hold of an underwater chest that holds the key for Joker to be able to control a God.

Injustice: Year Zero #5 would be a very uplifting issue if readers weren’t already aware of what lies in the near future for these characters. Superman has a talk with Lois about what’s been on his mind lately. The couple talk about the possibility of having children, but they don’t know if it’s possible or safe. To get answers, they consult a doctor familiar with super-powered patients, Charles McNider, a.k.a. Dr. Mid-Nite.

Any reader who picked up this book with no knowledge of either the original comic or the video game it was based on, would think this is a wholesome story, leading towards the birth of their son Jon Kent. However, most of us know the tragic outcome looming for the Kent family, that will prove to be a major turning point in this version of the DCU.

Meanwhile, the Joker enlists the aid of Black Manta to retrieve the mystic amulet from where it was hidden at the bottom of the Mariana Trench. With the amulet, the Joker gains the immense power temporarily wielded by Hawkgirl in Chapter Two.

I was impressed with Andre Chavard’s final acts of bravery in attempting to stop the Joker. First he attempts to snatch the amulet away, then he attempts to use one of Black Manta’s guns against the Joker. The Joker uses his abilities to disable the weapon and force Andre to exit Black Manta’s submarine, where he dies in the tremendous pressure of the ocean’s depths.

Poor Alan Scott. It seems almost certain that Alan is doomed, given that the first chapter hinted at a dire fate for the Justice Society and the final caption declaring, “Next: First to die in the JSA”. This makes his touching farewell to his partner, Jimmy seem tragic, when you realize that it’s probably their final parting. Andre’s death is somewhat expected, seeing as he’s a minor character that’s served his purpose, but Alan is a staple hero with decades of history. His death will have a huge impact and will mark a major turning point in this world’s history.

I also found it interesting that Andre Chavard mentions having served time in the “Suicide Squadron”, which is presumably this world’s version of the Suicide Squad. This makes me wonder about the Squad’s history in the Injustice universe. Perhaps this is something Taylor might reveal in the future.

The recent Green Lantern 80th Anniversary 100-Page Super Spectacular #1 redefined the Golden Age Green Lantern as being gay. Taylor has incorporated this retcon into the Injustice Universe. I don’t consider this a negative, but it’s likely that a certain segment of readers will react poorly to this.

I can see some justification for disliking this retcon in the main DCU, as it negates or at least complicates important parts of the character’s history (for example, his children Jade and Obsidian). But this is an alternate DCU, with a history that’s already divergent in significant ways. Nitpicking about changes like this is pointless, as Alan’s sexuality doesn’t really affect the story.

If you dislike Alan being gay in the main DCU, I’ll allow that your feelings might arise from discomfort with retcons of established DC continuity rather than from bigotry. But if you feel the same about it here, then you should seriously examine those feelings. Protectiveness of DC history provides no excuse in a universe outside of that history.

Injustice: Year Zero #5 provides an interesting look at this alternate DCU’s history.  It shows some sweet touching moments, that almost seem like a “happily ever after” for the DCU. It’s difficult to make a  compelling story when the audience already knows how it ends, but Taylor does so masterfully.