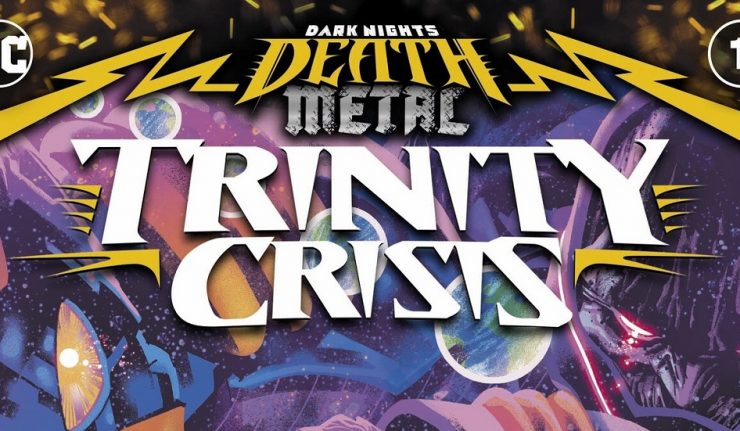 “Whose fault is this crisis anyway?” – Barbatos to the Trinity

“What…. He could have yelled for help.  And it felt good.” – Superman after clobbering Barbatos

With Superman freed from his New Apokolips prison, the classic Trinity lineup is reunited and ready to rock! Wonder Woman, Batman and Superman amp up their power to launch an assault on Castle Bat, and that’s just the warm-up act! Three walking nightmares are hidden deep inside the fortress—but these Dark Multiverse versions of the Anti-Monitor, Superboy Prime and Darkseid hold the key to humanity’s survival. The Justice League have to face down their old nemeses, but will round two be the end for our heroes?

Okay…Scott Snyder has provided a plan to end this Death Metal Trinity Crisis.  If you can go way way back to the start when Bruce Wayne was lost in time, and the seeds of Dark Metal/Death Metal was planted, Snyder is working a conclusion to a pretty extensive story.

Francis Manapul puts some really great pencils to work here.  Superman’s flowing locks are a reminder of when he emerged from his “death” in the Dan Jurgens run when Doomsday put Big Blue into the grave.

Wonder Woman…sigh… Greg Capullo and Manapul both give Diana the royal treatment she deserves.  And it is clear she is in control of this time expedition to get to the crises that seem to be fueling Perpetua.

Jonah Hex and Harley…is there anyone that Harley cannot team with and make it better?  She is really been a phenomenal character across a lot of comic runs this past year.

Snyder also sheds some light on the Year of the Villain as Barbatos does pose a pretty interesting question…. who’s to blame for this crisis?  The lens is cast back on the Trinity as the existence of these heroes does beg the question as to whether they are responsible for the evils drawn towards them.

There is a montage of heroes, villains, an artwork explosion.  Longtime DC readers will recognize a lot of things in this “Where’s Waldo” type of comic.  Snyder brings back the Grim Knight as well as some other incarnations of Batman.  Does it get a bit ridiculous at times…..well….yeah.

I think there was form of Kryptonite in older Superman comics that turned everyone into some odd sort of villain.  This is what I am reminded of as I look at every form of Batman who is seeking to stop the Trinity.

Perhaps this may be a spoiler, but I am not sure that the Trinity is really happy with Hawkwoman as she is a bit miffed about being left out of the core Trinity time mission.

Okay…. I am a huge Snyder fan… Spawn, Batman, Undiscovered Country…you get it!  However, he or DC is dragging this one out beyond belief.  Is this the reboot DC needs?  And if so, are we going to at least keep The Batman Who Laughs or the Robin King or the Grim Knight?  I don’t think we should give them back?

Also, Time Travel?  Using Alfred Boxes?  Aren’t these akin to Boom Tubes to Apokolips?  And haven’t we seen this strategy already in an Avengers movie?  Or was it in Back to the Future?  I know…it was Uncle Rico in Napoleon Dynamite.

Get the picture…it’s been done and it’s too easy of a solution.  Snyder has provided us his Stephen King moment…an intricate and well thought out story until the ending.  King always struggles in the ending, and Snyder seems to be as well.  Unless Luthor comes back to set things straight and draw the line between true good and true bad!

Trinity Crisis has become an interesting omelette of story telling.  The art is amazing and Snyder has been setting this up for quite some time.  But we don’t seem to be marching to a definitive end.  At least in this issue… 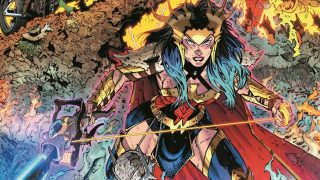 The Batman Who Laughs Rocks To Marilyn Manson in Dark Knights Trailer! 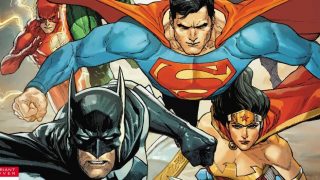