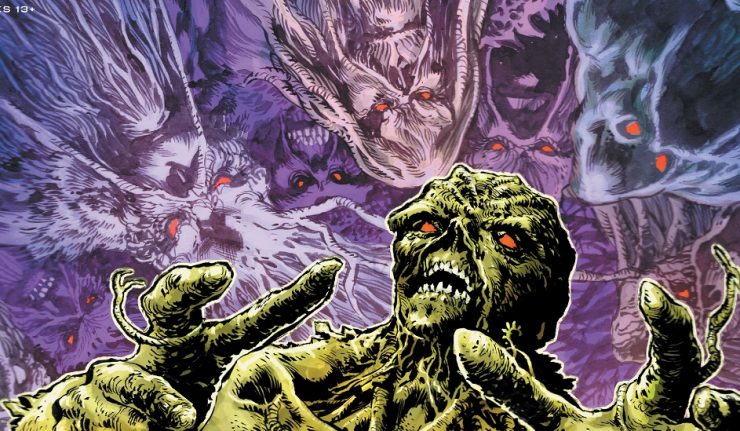 Behind an evocative Mike Perkins cover, Legend of the Swamp Thing Halloween Spectacular #1 is a beautifully scary collection of stories from the myriad Avatars of the Green.  It has more in common with Ray Bradbury than Alan Moore.

The most remarkable aspect of the Legend of the Swamp Thing Halloween Spectacular #1 is the tone that every story evokes.  Swamp Thing isn’t the main character in any of the tales, but rather the element of change in them.  The characters that experience growth or metamorphosis are pushed by the Swamp Thing.  In at least one case, the main character is deaf to Swampy and Swampy just becomes an observer.  They all have that “beautiful horror” element that was science fiction legend Ray Bradbury’s bread and butter.  Perhaps, Legend of Ray Bradbury Halloween Spectacular would’ve been a more fitting title.

Ram V and Mike Perkins provide two stories that also function as a framing sequence for the other four stories told in between.  This is reminiscent of Bradbury’s The Illustrated Man.  Ostensibly, this collection of stories explores different eras of the Avatar of the Green.  At no point, does Swamp Thing appear to be Alec Holland.  It spans Roman Britain to the near future.  It’s an effective vehicle for Swamp Thing.  It takes the greater concept and uses the character as way to tell other characters in horror stories.  In this respect it is much like the post-World War II era of Will Eisner’ The Spirit or the seminal Route 66 T.V. series.  The title/main characters are used to explore other ideas and concepts in an almost anthology style of storytelling.  They take a backseat to the “guest stars.”

There’s a stylistic mix in the art in Legend of the Swamp Thing Halloween Spectacular #1 that keeps the reader interested throughout.  Each story feels unique due to the change in setting that is matched by the artistic style of each individual artist.  If you’re a fan of different genres of comics, this book does a fine job in diversifying the types of stories, with art that echoes those differences.

While the most well-known Avatar of the Green, Alec Holland is nowhere to be seen in this issue, he’s not missed because of the excellent work by all the creators.  If you’re missing him, I recommend picking up Scott Snyder’s run during “The New 52.”  The last ongoing Swamp Thing title was Swamp Thing Giant, originally a Walmart exclusive which then expanded to comic shops in its second volume.  It’s probably time for DC to get Swampy back in a monthly title.

Legend of the Swamp Thing Halloween Spectacular #1 is not only a fitting issue for the Halloween season, but a literate and beautiful example of the variety that comics can provide.  Take a step into the swamp and let yourself be scared and enthralled by the stories here…you’ll be glad you did!