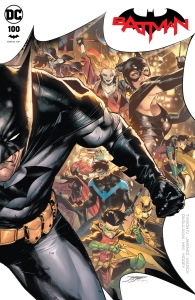 Batman #100: “The Joker War” comes to a city-shattering conclusion as Batman battles The Joker in a brutal, no-holds-barred duel! This is a fight 80 years in the making, and its outcome won’t just change Batman’s life-it will change Gotham City for years to come! Plus, catch the first glimpse of the new villain known as Ghost-Maker! And after the senses-shattering conclusion of “The Joker War” come a pair of short stories that will chart what’s to come in Gotham City and Batman. Don’t miss the first showdown between Batman and Clownhunter!

During Tom King’s run on Batman, King dealt with the question of whether it was possible for Batman to be happy. In this issue, Tynion reveals that the Joker’s response would be “Not if I can prevent it”.

Batman #100 brings us the culmination of the “Joker War”, presenting the showdown Tynion’s story has been building towards – the Dark Knight versus the Clown Prince of Crime. During this confrontation, the Joker makes some revelations at what he’s been up to.

The shiny new Batman costume designed by Alfred represents a brighter future for Bruce and Gotham City. But the Joker’s motivation was to destroy any hope of that future. He explains, “Whatever future you had dreamed of, where you got to wear this shiny new costume? It’s gone, Bruce. It’s all gone”. The Joker has “planted the right seeds” to prevent Gotham from becoming the shining Metropolis that Bruce envisioned.

Thanks to the Joker, Gotham will no longer trust the Bat-Family or Wayne Enterprises. “Batman was a stupid little kid’s stupid idea. And now this city sees it for how hollow it is… It’s about to get so much harder. I’m making you start over from scratch”.

However, Harley Quinn intervenes, saving Batman. She leaves the Joker in a deathtrap, giving Batman a fateful choice: capture Harley Quinn or save the Joker. However, Bruce’s choice is surprising. Although he’s always put saving lives over stopping criminals before, this time he leaves Joker to his fate. Perhaps he had faith that the Joker would be able to escape, but it’s unlike Batman to take chances with any life, even his arch foe’s. And it’s a decision that absolutely enrages the Joker. 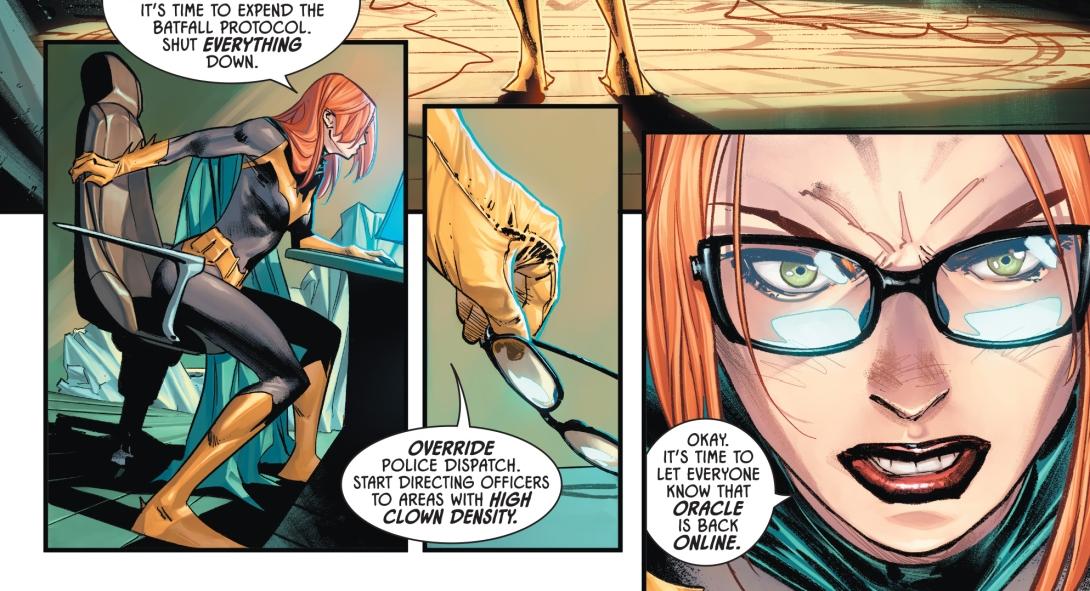 I quite liked the scene with Batman and Harley, set a week later. It’s quite odd to see Batman looking out over a Gotham City in daylight. Oddly, Batman seems in a rather upbeat mood, telling Harley he’s glad that she’s okay.

He tells Harley about something his father once told him: “a fight with Joker is a fight against death itself. And that fighting is living, continuing on And I’m ready for that fight… And what comes next is going to be hard. But I think I can meet it face on. I think I can be a better man. A better Batman”. Instead of despairing in the face of the damage Joker has wrought, Batman has found new purpose and motivation to continue his fight against crime. This is quite the optimistic speech from the Dark Knight.

And to top it off, when Harley responds with a joke, Batman actually smiles. A surprising, but encouraging sign that Bruce is starting to heal from his recent tragedies.

Also, I love that Bruce refers to Alfred as “my father”. It’s not the first time, but it’s touching to see Bruce openly recognize that Alfred was as much his father as Thomas Wayne was. 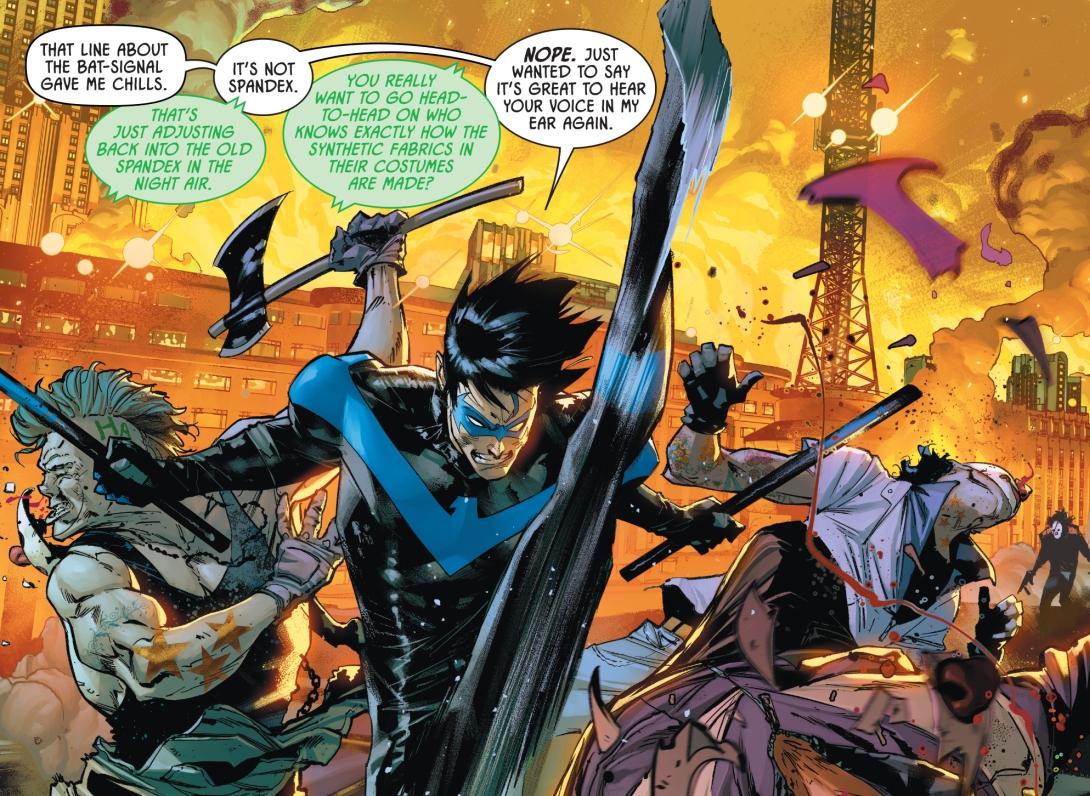 Bruce’s brighter outlook seems to carry over in his encounter with Clownhunter in the first backup story. Instead of fighting the young vigilante, or attempting to scare him straight, Batman instead extends a helping hand. He implores the youth to go to Leslie Thompkins for assistance instead of going down the dark path he has started on. Of course, he does warn Clownhunter that if he kills anyone else, “Then I’ll stop you, if I have to”.

The final epilogue lets us in on what’s happening with Joker and Punchline in the war’s aftermath. The Joker plans on leaving Gotham for a vacation. This is Tynion’s way of telling us that he’s not planning any more Joker stories in the near future. This is a good thing. Between “Joker War” and “Three Jokers”, he’s starting to become a bit overused. It’s best to wait awhile so that his next appearance can have more impact. Meanwhile, Punchline is portraying herself as a poor deluded victim of the Joker’s, setting herself up for either an acquittal or light sentence for her crimes.

While the main story was beautifully illustrated by Jorge Jimenez, I was glad to see that Guillem March also got to take part in this landmark issue, as well as Carlo Pagulayan and Danny Miki. Batman #100 looks gorgeous from cover to cover.

Punchline is portraying herself as a poor deluded victim of the Joker’s, setting herself up for either an acquittal or light sentence for her crimes. Despite DC’s insistence that Punchline is the breakout character of the year, Punchline doesn’t really live up to the hype. I think Harley best sums her up when she calls Punchline a “mean lady with a dumb name who wasn’t even funny or anything”. Perhap it would be best just to let Punchline fade into comic book Limbo.

Batman #100 was the perfect conclusion to the “Joker War” storyline. It not only sets up challenging obstacles for Batman to overcome in the future, but gives us some hope that Batman can overcome them with renewed resolve and a bit brighter outlook. I look forward to seeing Bruce and the Bat-Family meeting these challenges in the months ahead.