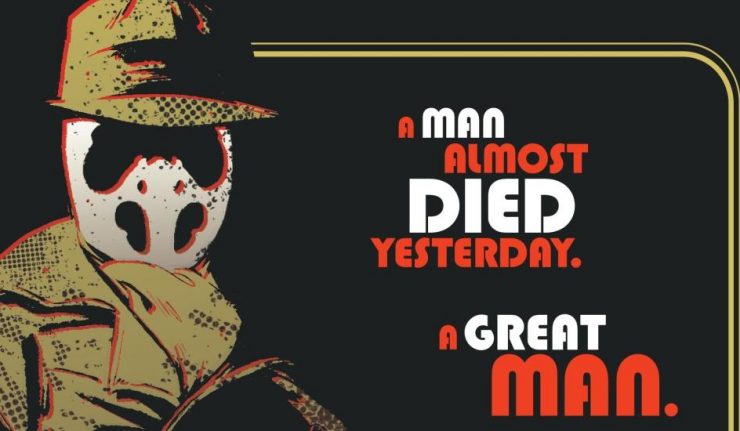 Rorschach #1: It’s been 35 years since Ozymandias dropped a giant interdimensional squid on New York City, killing thousands and destroying the public’s trust in heroes once and for all. And since that time, one figure in a fedora, mask, and trenchcoat has become a divisive cultural icon. So what does it mean when Rorschach reappears as an assassin trying to kill a candidate running against President Robert Redford? Who is the man behind the mask, and why is he acting this way? It’s up to one detective to uncover the true identity of this would-be killer—and it will take him into a web of conspiracies involving alien invasions, disgraced do-gooders, mystic visions, and yes, comic books.

Rorschach #1 is the first issue of Tom King’s latest 12 issue maxiseries for DC’s Black Label line. King has had great success with this format a number of times now: Sheriff of Babylon, Mister Miracle, the currently running Strange Adventures, and the upcoming Batman/Catwoman. So expectations are fairly high for this series.

However, Rorschach seems to be something of a strange title. For one thing, we’re not even sure if the title character is even in the book. Someone wearing a Rorschach costume is killed on the very first page, and the rest of the issue tells us the story of a detective trying to discover the true identity of this person and what they were trying to do.

Also, although Rorschach #1 follows the viewpoint of this detective, we are never given his name or any background information. He’s as much of a mystery as the dead man he’s investigating. I wonder between the two of them who we’ll learn more about before the series ends.

King has stated that he intends his story to have a 60s/70s noir feel. He definitely is succeeding in that regard. Although it’s explicitly stated that the story is set in 2020, the clothing, hairstyles, and technology all seem to fit that era. The nameless detective could have stepped right out of a 70s TV crime drama. The detective carries a pager and makes a call from a stationary landline phone (with a cord). And audio is played on a reel-to-reel player.

It seems that Doctor Manhattan’s advances to technology in some areas has stunted human advancement in other areas. Or has technology regressed in the years since the events of Watchmen?

King has also stated that this series is not a direct sequel to Watchmen or Doomsday Clock. There are enough references to the Watchmen characters to establish that this is the same universe, but so far none of the original characters have put in an appearance – except possibly Rorschach himself.

But was this person really Rorschach? It seems impossible on the face of it. Doctor Manhattan disintegrated him at the end of Watchmen – or did he? Could he have actually have displaced him in time?

A likely identity is uncovered for this Rorschach, by the name of William Myerson. However, Myerson would have been significantly older than Walter Kovacs and seemed to be very unlike Kovacs in many other respects. It seems clear that this couldn’t be the real Rorschach.

But then why does his body have Walter Kovacs’ fingerprints? Something weird is going on here and I am definitely intrigued. After this first issue, I am hooked.

Jorge Fornes is proving to be the ideal choice of artist for this series. I get the sense that he is drawing inspiration from comics artists of the 80s, the era of the original Watchmen series. More than once, the art made me think of David Mazzucchelli’s work on Batman: Year One. And Dave Stewart’s colouring perfectly complements Fornes’ artwork. The colours beautifully evoke the mood of King’s story.

In most other stories, I might consider the lack of information about the central character to be a flaw. But I think King has made a bold choice hear. By keeping this detective so enigmatic, he is giving the reader more room to place themself in the role of this investigator. It’s almost as if King is putting the reader directly into the story.

Of course, I could be wrong and King might give us the detective’s full name and backstory in issue #2. But it certainly would be an interesting stylistic choice. I will have to see if this theory holds up as the story progresses.

Damn, I have to admit that this mystery has me intrigued. After reading Rorschach #1, I am prepared to follow Tom King down whatever rabbit hole he’s heading toward. This series promises to be a truly memorable story.