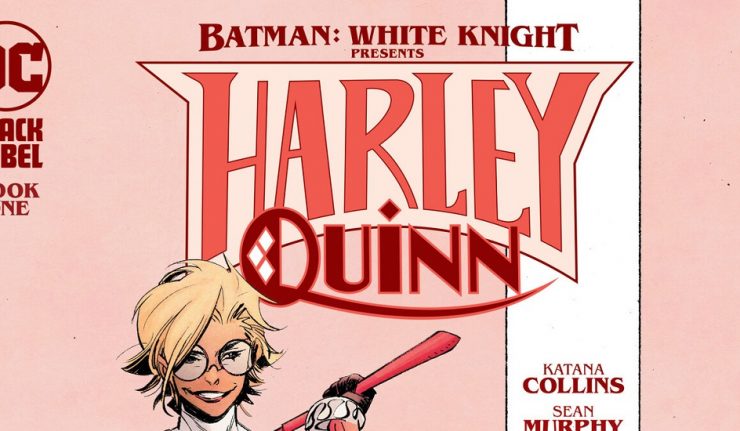 “I ruined him.  Without me, the Joker we know now may have never existed!” – Harley Quinn

The Joker is dead, Bruce Wayne is behind bars…and Gotham City is just starting to redefine itself without Batman.
As Harley Quinn struggles to adjust to her new life as the mother of Jack Napier’s twins, an elusive mastermind called the Producer seizes the moment to assemble a crew of villains-starting with the Starlet, a serial killer who murders Gotham’s golden age film stars in homage to their silver screen roles.
When a recent, gruesome crime scene suggests a connection to The Joker, the GTO, and FBI agent Hector Quimby turn to Harley as the one person with information that could crack the case. With some help from Bruce, Harley agrees to investigate-but to protect her children and her city from a fatal final act, Harley must flirt with madness and confront her own past.

The highest compliment I think that writers can provide each other is that they invite them to use their characters in a story.  It’s like your kids inviting them over to play in your sandbox.

While “Murphyverse” creator Sean Murphy is along for the ride as well, he has given the artistic reins to Matteo Scalera and joined Katana Collins for the writing detail.

Picking up where the White Knight series has left us, Bruce is in jail “keeping up with things” and the Joker is dead (at least we are left with that impression).

Collins and Murphy paint a post-partum Harley as her house is a wreck, she yearns for Jack and Bruce, and is not confident in any of her skills as a Mom. In fact, she shares with Duke that the twins are her kids, but her Hyenas are her babies.

Harley in the Murphyverse still has a twinge of living on the edge, and possibly this “normalcy” may teeter her over.  From a visit to Bruce in prison to the eventual involvement into a murder investigation, we get to see an evolving picture of a “near normal” Harley who clearly has feelings for Bruce and also wants to be a part of something bigger.

Collins and Murphy are setting up a Harley showdown as well if you are familiar with the prior Murphy works.

The authors provide us that Harley was once and still is a criminal psychologist and her detective skills rival that of Bruce’s.  Immediately recognizing a copycat Joker motive at work, she informs the GCPD that she works alone!

The last page of an intense Harley in her costume flanked by her babies…that’s cool!

It’s clear I am a fan of the “Murphyverse” that Sean Murphy has created.  It’s a raw Batman full of homages to the comics as well as the movies.  But it is not campy and it is done with style.  I was worried in that handing over the controls to another writer and artist might cheapen it.  It actually is like adding a dark chocolate to a great red wine.  The flavor bursts are amazing!

Not one at all.  Well…Batman/Bruce has arguably gone soft towards Harley.  But that is what I like.  No Selina in this Murphyverse.  Characters are dripped in slowly, and it is really cool to have been in on the ground floor as Sean Murphy and his team have developed Azrael, Freeze, Robin, Batgirl, Joker/Jack, and Harley slowly and more methodically.

We know the back stories, but do we really?