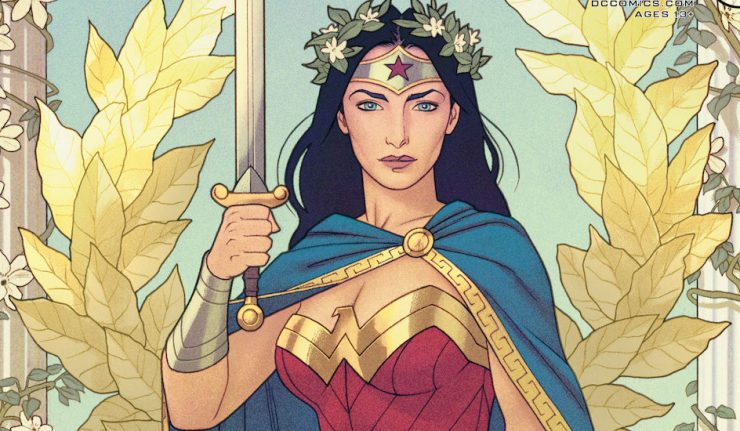 Wonder Woman and Max Lord are on the hunt for some missing and extremely dangerous weaponry from Lord Industries, and the search has brought this unlikely duo to…Miami? Fun in the sun will have to wait-because if Diana and Max can’t uncover this illegal arms trade, the entire city could be blown sky high! But we’re sure Max Lord will be nothing but helpful…right?

The cover by David Marquez and Alejandro Sanchez is fun. It’s a cute way to display the buddy cop dynamic between Diana and Maxwell Lord. And it looks great; I love the coloring.

I love that no one really cares that Wonder Woman is walking around because they’re too starstruck by Maxwell Lord who pretty much the entirety of Miami has mistaken for a famous TV actor. That’s a good joke.

The action is cool. Diana summons a shark to help her fight a bunch of robots. It’s badass and a lot of fun. The art is also a lot better in this sequence than much of the issue.

I don’t love the interior art. Some of it is okay; the colors are nice and the detail is solid. For me, the faces just look off in a lot of places especially Diana’s. Stylistically, I find it unappealing.

I’m not that invested in Diana working with Maxwell Lord. It was cool when they were fighting his daughter. And that element is still in play to a certain extent. But the dynamic between the two isn’t really fun. Maxwell Lord spends most of the issue just being an obviously evil jerk while Diana wags her finger at him. It’s kind of boring.

For example, during the action scene, Maxwell Lord does very little but make snide comments in the background. It’s not a funny dynamic; it’s weird and distracting.

I don’t love this issue. There some okay elements. It has a solid sense of humor and the big action sequence is great. But the story itself isn’t that interesting; I don’t think Diana and Maxwell Lord make a good buddy cop duo. It’s flat. Additionally, I didn’t really connect with the art. For me, the issue was underwhelming.