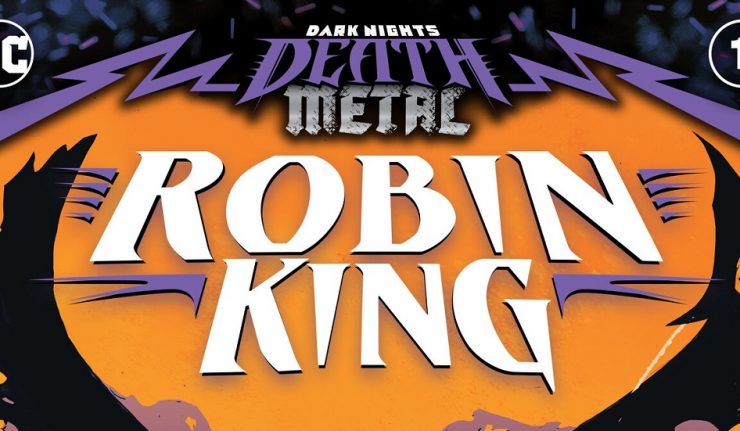 This is a staple issue in the Death Metal saga that cannot be omitted in your collection.  Dark Nights: Death Metal Robin King #1 provides the origin of the relationship between he and The Batman Who Laughs.

With a utility belt filled to the brim with weapons designed to kill every hero in the DCU, Robin King is the most sadistic soldier in the Darkest Knight evil army! Can anyone stop him from laying waste to Earth’s last line of defense? And how did he become one of the Batman Who Laugh’s “groblins” in the first place? And in the backup story, can the Robins liberate Gotham City from the Darkest Knight’s control?

First… the writers at DC must have set up a crime lab scenario from one of those “whose connected’ scenes complete with yarn that connects photographs.  They have pulled out all the stops and it is clear that Peter Tomasi took his role very seriously in fleshing out The Robin King.

From contributing to his origin story, to the assembling of a tool kit that can take out ANY hero in the DC Universe (If this is not shades of Batman preparation, what is?) to taking characters off the DC shelf and using them in a unique way in battles, Tomasi has written a pivotal piece in the Death Metal series.

Rivaling Scott Snyder and Greg Capullo, in their story telling, Tomasi pairs his story with the unique artistic talents of Riley Rossmo.  You can tell an illustrated Rossmo story immediately.

It is both frenetic and in order at the same time.  It is hard to explain as his hero and villain renderings have that odd shaped skull along with the “white eyes” for every masked character.

Taking Blue Beetle, Animal Man and Red Tornado off the shelf provides the reader that The Robin King was extremely comprehensive in his preparation on taking down EVERY hero.  I mean what villain preps as hard for Blue Beetle as they do for Wonder Woman or Superman?

This is a book of layers in that the Tomasi story is the main driver of the book (my opinion).  The Batman Who Laughs and Robin King origin is fleshed out even more.

The Batman Who Laughs continues to evolve in his evil and his “all knowing” of plans.  With such a comprehensive villain that can detect EVERY move by both hero, villains, and Robin King, how are we ever going to be rid of him/it?

The story line is powerful and poignant for the Death Metal series, and even provides somewhat of an admiration or even respect between The Batman Who Laughs and The Robin King.  This twisted Dynamic Duo cannot exist if the heroes wish to prevail.

Not a negative, but a question of why the Signal story, The Quiet Ones, was included in this issue?

Perhaps a tie-in to the cleanup that has to happen in Gotham right now post Joker War?  And what do you name a Batman who is not combined with Joker but with Ra’s Al Ghul?  Quietus?  He’s anything but quiet…

Look at the graphic above of the worktable of The Robin King.  That is one scary utility belt!

Animal Man #27 Review: What Lies Beneath