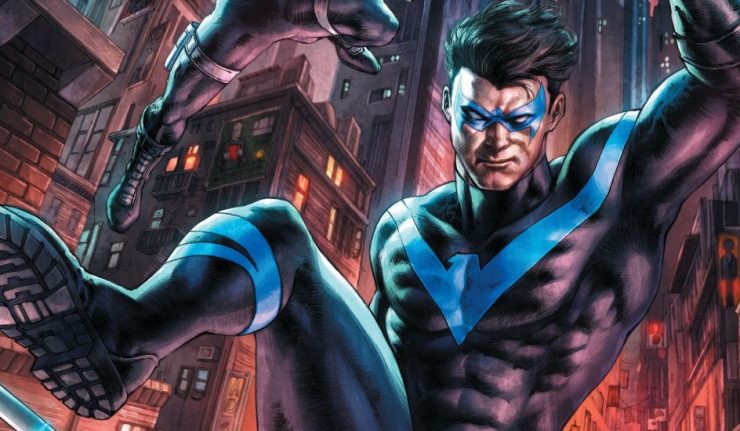 In the wake of “The Joker War,” Nightwing is back—but is he back for good? And does he remember Bea? With the help of Batman, Batgirl, his Teen Titans friends, and even Alfred, Nightwing must decide for himself which path to take. Then, when KGBeast discovers Nightwing is still alive, his street credibility is on the line if he doesn’t go to finish the job he started when he tried to kill Nightwing…and missed! Nightwing better watch his back is he wants to be back for good!

Nightwing #75 has one major thing going for it. Dick is back in the suit. There is a hysterical joke about his tight pants from Bea at the end. That is genius. I love that. Watching Bruce and Babs team up with Dick again was special. I loved it a lot. The art by Moore and Cliquet is special. They each draw action so well.

The best part of this issue though is the voiceover. It is pretty clear who it is supposed to be but how we hear it isn’t very clear. It is a lovely, touching tribute from Dick to the person who raised him and made him the man he is. The real hero is always Dick Grayson, not Nightwing and this issue reminded us of that.

Nightwing #75 is a super sized issue, but it really doesn’t need to be. It was nice to see some excellent art work from Moore and Cliquet, but it all seemed a bit like filler. The real story of this issue is the reveal who the narrator is and that is touching. I think maybe people at DC were worried that a whole episode where Dick works through some stuff and doesn’t kick anyone in the face wouldn’t be very good. After everything he has been through, it would be kind of refreshing.

The idea that after all of this, Bea is going to be fridged is pretty annoying. That last panel, which was supposed to make us buy the next issue, really only made me roll my eyes.

Nightwing #75 brings the world back into stasis…sort of. I am keen to see where everything goes for Dick and what seems to be team Nightwing. I think that is a great plan. That last page is a bit of a crappy move. I mean, can’t the most optimistic hero in the DC Universe have just one good day?