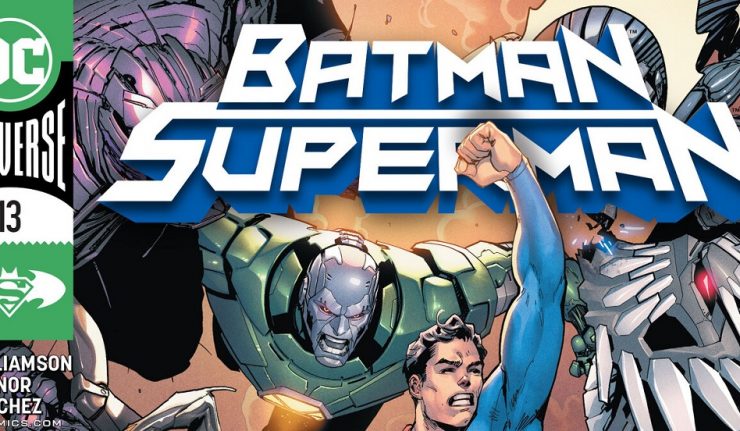 “I forget how pessimistic you can be Batwoman.” – Steel
“It’s the number one thing I learned from Batman.” – Batwoman

Batman/Superman #13 – What happens when the Dark Knight and the Man of Steel wake up on a skull-shaped planetoid packed full of cybernetic versions of their entire rogues galleries?

Figure out why they’re being worshiped like gods, that’s what! What is this strange new Brainiac’s endgame-and how did Batman and Superman’s own villain database mutate into this twisted, metallic death planet? The mystery deepens as Steel and Batwoman desperately search for their missing comrades…

If the image above doesn’t get you fired up, nothing will! A space suit adorned  Batwoman yielding Steel’s hammer pummeling a robotic Doomsday! And that is how Joshua Williamson starts this issue with a robotic Rogue’s Gallery created by an imitation Brainiac.  What is even real in this issue?

Williamson has provided a tale that is pretty interesting.  A computer program that is interested in nothing more than understanding our heroes… what makes Batman and Superman tick?  By using metallic doppelgangers of their Rogues Gallery, Batman and Superman don’t have to hold back their punches.  But the program poses some interesting questions to the pair as it seeks to both “defeat” them as much as understand them.

“Why don’t you save Lex?  Can you help me understand why you see Lex as an enemy?” That has to be a clue as to whom is behind this.

Batman tricking the computer into creating a Joker robot which ultimately….well you know.  He’s an agent of chaos, so let your imagination run on this one!

The last page…have we seen  such a villain since Hank Henshaw – The Cyborg Superman?  The Batman Who Laughs brought the World’s Finest to this new comic.  I fear this new villain may end this at issue #14!

Batman/Superman #13 – This has now catapulted Steel and Batwoman to a new level.  Steel has been underplayed a bit in recent times, but it is time for he to come to the forefront.  Perhaps Steel, Cyborg, Black Lightning, and Jessica Cruz can be the DC Fantastic Four.  I digress…. but the World’s Finest doesn’t!  Buy this book!