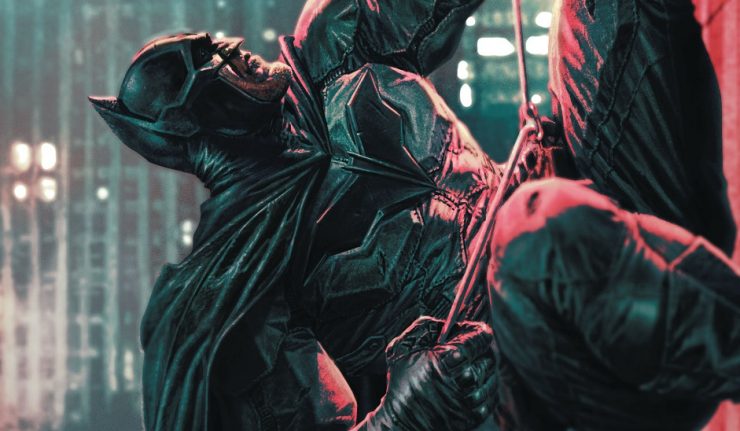 Meet, the Mirror!  The reflection of the people of Gotham has appeared to push the anti-vigilante agenda just like mayoral candidate Christopher Nakano.  And, who should come to save Nakano when the yacht he’s on is hijacked?  Nightwing!

The questions about vigilantism that are addressed in Detective Comics #1029 are at the core of the whole notion of the super-hero.  In the real world, it’s obvious that people taking the law into their own hands are dangerous.  However, in the four-color world of comics and heroic fiction, these vigilantes are not only the good guys, they are the ideal.  Grounding this idea with real world sensibilities presents a different look at our favorite comic book characters.

This is demonstrated in the issue in a sequence in which Batman saves a hostage and stops some back robbers.  While he gets thanks and gratitude from the man he saved, other observers chant, “Unmask! Unmask!”

Since Bruce is unable to go into action on the yacht it’s nice to see Nightwing save the day.  It provides Bruce the opportunity to have the scene as Bruce as well as get Nightwing some much needed panel time.

Roccafort and Brown combine again for some really nice looking pages.  It’s tough to go wrong with this team.  Though a bit lighter in approach than some of the other art teams to grace the title in the past year.  Roccafort and Brown do it with their own style.

There’s some nice quiet moments for Bruce as well.  As he packs up the mansion, he has a brief moment thinking of Alfred as he is unable to pack away his pictures just yet.

Detective Comics #1029 is solid.  There’s not much with which to find fault, I was hoping with the title- “Who Are You?” there would be more musical references….

Peter Tomasi continues to write some great Batman material.  He’s always paired with great art teams even if the art teams themselves vary in style.  Tomasi is setting up a big mystery that should incorporate the Mirror, the anti-vigilante movement and the missing Black Casebook.  Great stuff here, don’t miss this!