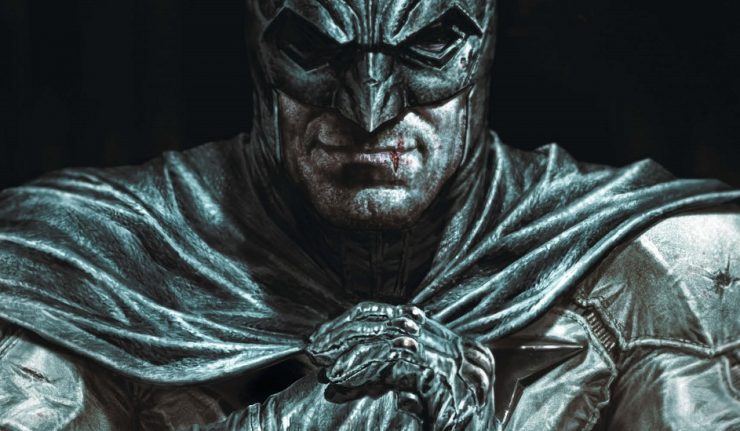 Batwoman teams up with Batman for the first time in a long time as “The Joker War” spills into the pages of Detective Comics.  The Duo take the fight to Wayne Enterprises where Lucius Fox is still under the Joker’s control.

Crossover events can often be difficult to manage.  While “The Joker War” is centered in Batman, Peter Tomasi continues to explore aspects of the story.  While it may be difficult to get worked up about the “event,” Tomasi uses Detective Comics #1025 as an opportunity to revisit the state of the relationship between Kate Kane and Bruce Wayne.  They manage to set things aside in order to work together, and it’s the strongest aspect of the issue as we see how similar the two are.  When Kate tells Bruce, “My bike, my rules,” it’s clear Batman isn’t used to not being in charge.  It’s a moment that says a lot about the two characters, but also provides a bit of humor in what is otherwise a fairly violent issue.

The first appearance of the “Joker Wing/ Joker Plane” is also lighthearted.  There’s always that whimsical side to the Joker that surprises.  We’ve seen the Jokermobile before, but this repurposed Bat-aircraft is truly bizarre…and entertaining.  The action is good in this issue as well, considering this is a war.  While the story doesn’t get Batman closer to stopping the Joker, per se, it does expand the scope of what’s going on in Gotham.  Additionally, Bruce and Kate do make it to Wayne Enterprises in time to save Lucius Fox.

Kenneth Rocafort and Dan Brown combine to bring a distinctive look to Detective Comics #1025.  Rocafort is a good artist and his style is unmistakable.  Part of that seems to be the color palatte used by Brown.  He uses lots of blacks and reds throughout reminding the reader that this is Batwoman’s issue.

I find it difficult to get worked up about an event like this that takes over so many comics, often they sacrifice character for the sake of action and mayhem.  There’s not an excessive amount of that here though.  Clearly, tying in to “The Joker War” narrative takes the book in a different direction.  While the previous arc was able to focus a little more directly on Harvey Dent and Batman’s checkered friendship.  Detective Comics #1025 is more action oriented and dependent upon the crossover storyline.

Crossovers may not be your thing, but there’s still some interesting character moments for Batman and Batwoman in Detective Comics #1025.  Tomasi reminds the reader of the complexity of these characters, especially Batman as he has to work with someone just as headstrong as he is.  This is a good issue with a few lighter moments to alleviate some of the mayhem of “The Joker War.”