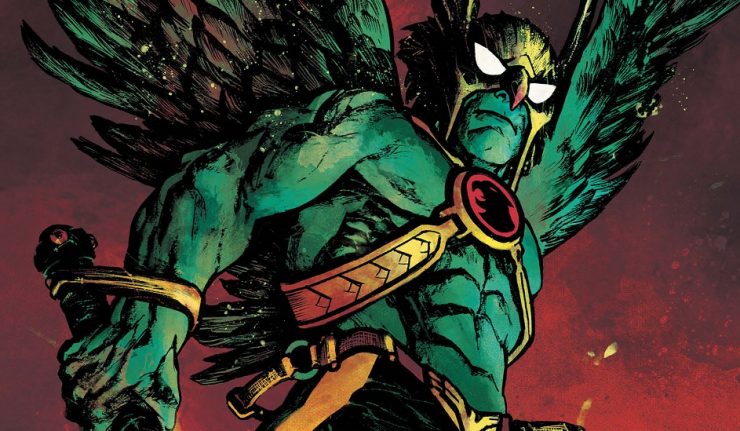 Hawkman and Hawkwoman sacrifice everything to stop the Lord of the Void, but at what cost?  And what is their final reward?

Just like all of his work, Robert Venditti makes character the focus, and the past 25 issues of Hawkman has led to this.  As the end of a single story arc, it works wonderfully, but as the end of a 26 issue epic, it works even better.  The finale fits perfectly with the set up way back in Hawkman #1.  What’s really incredible, Venditti has not sacrificed the short game for the long game.  Every issue and story arc has been building to this moment.  He’s teased when he’s needed to, but never lost sight of the resolution.  Additionally, he’s juggled numerous characters along the way, each of whom has contributed efficiently to grand design.  This is a perfect example of this type of storytelling.  Not many writers can execute such a long and complex arc.

After Carter and Shayera defeat the Lord of the Void, they find themselves in the presence of…?…the Presence for whom Shayera was a herald as described in Hawkman #25.  As Hawkman learns he’s redeemed himself, Shayera regains her herald wings and is restored to her station.  However, the Presence astutely senses that the couple wishes to have another chance at life.  The Presence grants it, but it may be at a cost.  This scene is written sensitively by Venditti and rendered beautifully by Pasarin, Albert and Von Grawbadger.  Jeromy Cox’s colors perfectly reflect what appears to be the Christian notion of Heaven.  The soft yellows and whites are comforting and peaceful.  How can the Hawks wish to leave?

As the Hawks are allowed to return to their lives, the Presence drops them into the “lifetime (they) both hold closest in (their) hearts.” Many DC fans will find this lifetime to be the one they hold closest in their hearts as well.  It’s been a long time coming for fans to see the Hawks with these old friends, and it is both immensely satisfying as well as incredibly exciting for what comes next for Hawkman and Hawkwoman.  As great as Hawkman #26 is, one can’t help but feeling even more excited for next month’s Hawkman #27!

As brief as it is, Adam Strange and the Atom get to play a small role in this issue and it is a perfect addition, much as their appearance in the previous issue was well suited.  Ray’s tears at the thought of Carter being dead is a fitting moment for these old friends.  One wonders how long Ray will have to wait to discover the truth of Carter’s story!

There just aren’t any negatives for Hawkman #26.  The only downside at all is having to wait a month for the next issue.  And, that’s just a fact of life!

Over the past two years, Robert Venditti has been exploring Hawkman’s new status quo.  Along the way we’ve learned about all of Hawkman’s past lives and how he’s reincarnated through time and space.  Hawkman #26 wraps up the storyline with the Lord of the Void, but also ties a bow on the first 26 issues as Hawkman and Hawkwoman defeat the Lord of the Void.  This issue brings everything together beautifully in a satisfying manner while also setting the Hawks off in the next step of their lives, or is it just earlier in their life?