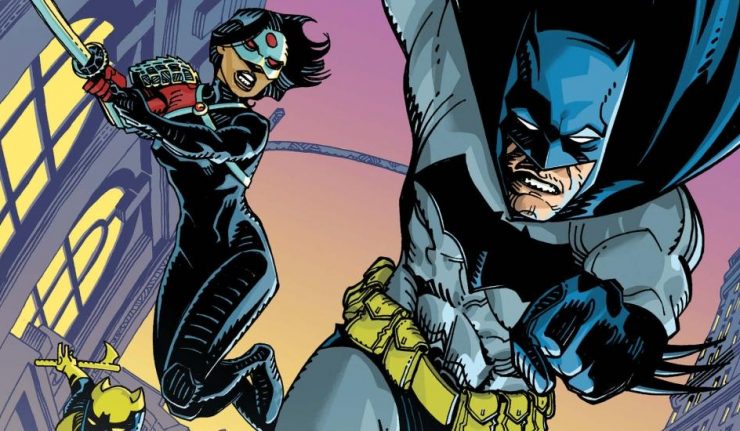 Review: BATMAN AND THE OUTSIDERS #15

Batman and The Outsiders #15: The Outsiders have uncovered a massive piece of information about Ra’s al Ghul’s new weapon-and Black Lightning is prepared to exploit this weakness! He’ll go to any length to stop Ra’s’s weapon…but is that exactly what the Demon wants? And will Batman be able to stop Black Lightning from draining his powers?

In Batman and the Outsiders #15, the Outsiders regroup while on the hunt for Ra’s Al Ghul. When the Signal and Orphan departed with Shiva, I had thought that marked a major split in the team, but the reunited team appears to have merged back together with no rancour or recriminations.

The team tracks Al Ghul down to Japan, where they find that his target is a meeting of the Master Group, which Batman describes as “a secret consortium of corporate leaders. Tech. Real Estate. Media. Unofficial and very powerful”.

Batman’s assumption is that Ra’s, finding this group particularly offensive, would be looking to inflict violence on them. I like that Hill demonstrates Batman’s pragmatic side. When Katana asks if the plan is to protect them from Ra’s Al Ghul, Batman answers, “No. Our only priority is destroying that weapon”. It may seem uncharacteristic for Batman not to protect all lives at stake, even criminal lives. But Batman is still affected by his grief over Alfred. He is solely focused on stopping Ra’s from unleashing the power of the alien weapon on the world.

I also found Bruce’s offhanded revelation that the Master Group had once attempted to recruit Bruce Wayne as a member. It makes me wonder how many similar shadowy organizations have unwittingly put themselves on Batman’s radar by trying to enlist Bruce Wayne.

We also begin to get a hint of just how powerful Black Lightning is with his recent upgrade. We see him producing a large sphere of lightning above a Japanese skyscraper. I don’t know if Jefferson will be staying at this heightened power level after this story concludes, but I hope he does. It would be great to see Black Lightning emerge as one of the DCU’s powerhouses.

I also have to commend Dexter Soy’s fantastic artwork. I especially loved his illustration of Black Lightning’s massive show of electrical power. And I am continually blown away by his awesome rendition of Batman.

Bryan Hill has brought this storyline to a slow boil, with us only coming to the verge of the climactic fight with Ra’s Al Ghul after 15 issues. I’ve been content to enjoy this story at this pace so far. However, after learning that the series is ending with #17, I now wish Hill had not taken so long with this story, so that he could have given us more stories than just this one. Instead we will be left to wonder what other adventures of the Outsiders Hill could have given us. However, it’s too late to fret about that now. I am sure that Hill will at least bring this storyline and series to a satisfying conclusion.

With Batman and the Outsiders #15, Bryan Hill has provided us another exciting issue of this series. It’s too bad that this series is winding down, but I trust that Hill and Soy will give us an explosive final confrontation with Ra’s over the final two issues.