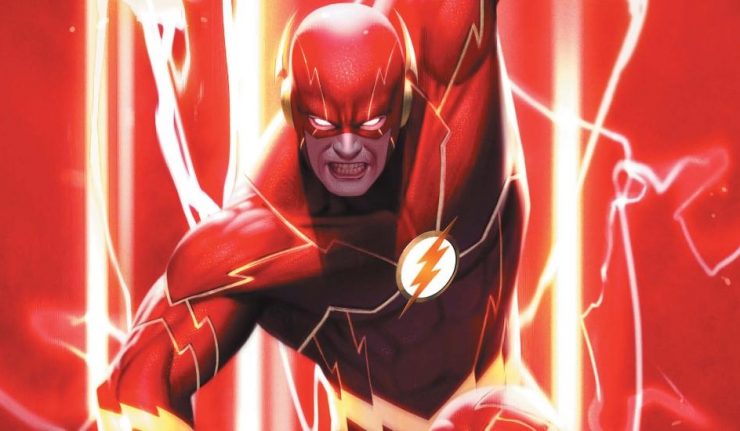 The Flash #759: A NEW STORY LINE BEGINS! “Finish Line” part one of six-leading to the finale of Joshua Williamson’s legendary run on The Flash! It’s Barry Allen’s last race! The Legion of Zoom has won. Central City is in ruins. Barry Allen is trapped in the Speed Force, his body taken over by the Reverse-Flash!

The Flash #759 marks the start of a new storyline titled “Finish Line”. This title is aptly named, as it is the last storyline in Joshua Williamson’s run on the title. And to mark the occasion, we see the return of a number of long missing Flash Family characters. However, Barry is not himself – literally. Eobard Thawne, the Reverse-Flash, has managed to possess Barry’s body, displacing Barry’s mind into another realm.

Last issue, Barry stated that that realm was not the Speed Force, but he was sort of wrong about that. As Max Mercury explains, “The Speed Force doesn’t just connect on a physical or mental level, but deeper. Wally went through something similar right after he and I first met. He was lost and needed to find his way back…”.

Max seems to be saying that Barry, as well has Jesse Quick and himself are stuck in a nether state on the edge of the Speed Force. A state from which it’s still possible to return. Wally, Jay, and Bart have all returned from this state. Max implies that Barry can return, but it seems to me that if he and Jesse possibly still can return also. Jesse also tells us that she can still feel her father, Johnny Quick around them, but it seems that he has fully been absorbed into the Speed Force and is thus beyond the point of no return.

In some ways, this story reminds me of Mark Waid’s “The Return of Barry Allen” storyline in The Flash (Volume Two) #74-79. In that story, Thawne had replaced Barry Allen, but in that case, he actually believed he was Barry – at least at first. But Thawne’s increasingly evil behaviour cause the Flash Family to realize he was an impostor. Similarly, Thawne’s treatment of Barry’s friends and family make it clear that they aren’t dealing with the real Barry.

There is a neat crossover with last week’s Young Justice #17. I like seeing the when two separate titles crossover and show the same events from different perspectives. In that issue of Young Justice, a number of the young heroes have conversations with their mentors. We saw Impulse and the Flash run off together, but we didn’t see their actual talk then. In this issue, we again see them leave, but this time the viewpoint follows them and we see what transpires during their talk.

It was also quite amusing to finally see the meeting of two kid Flashes as Wallace meets Bart Allen. Williamson clearly has a feel writing Bart’s dialogue. When Wallace declares himself to be Kid Flash, Bart declares, “So am I! Actually, no. I used to be Kid Flash. Now I’m Impulse… again”. However, Iris informs Wallace that Bart is family, shocking him with the news that Bart is her grandson.

While Bart is the first to realize that “Barry” Is an imposter, it is Iris that realizes who he really is. She states, “Bart was right. You’re not Barry. You tried this before. With Wally And on my wedding day…”. Iris’ memories of her pre-Flashpoint life allow her to recognize Thawne.

It seems to me that those timelines are starting to converge somewhat. Impulse, Jay, and Jesse are parts of the pre-Flashpoint history, while Wallace and Avery represent the New 52/Rebirth history. Hopefully , this is leading to a final resolution between the two histories. I would especially hope to see Barry and Iris’ marriage to be re-established as canon when the DCU’s continuity issues are finally settled.

I also love that the artistic device of having Scott Kolins draw the scenes set in the Speed Force while Rafa Sandoval and Jordi Tarragona drew the rest. The change in art style really gives the Speed Force an surreal, otherworldly feel, emphasizing the difference between the two planes.

I’m delighted to see all these old friends return, especially Jay and Max. However, there’s one important person still missing: Wally West. Given the events in Dark Nights: Death Metal so far, I don’t expect we’ll be seeing Wally in Finish Line. This is a shame. But Williamson will be writing a story teaming up Jay, Barry, and Wally in the Speed Metal tie-in to Death Metal.

I hate that The Flash #759 marks the beginning of the end of Williamson’s run, although I know that I’m going to enjoy the Hell out of each issue left. I have know doubt that “Finish Line” will provide the perfect cap to a fantastic run.