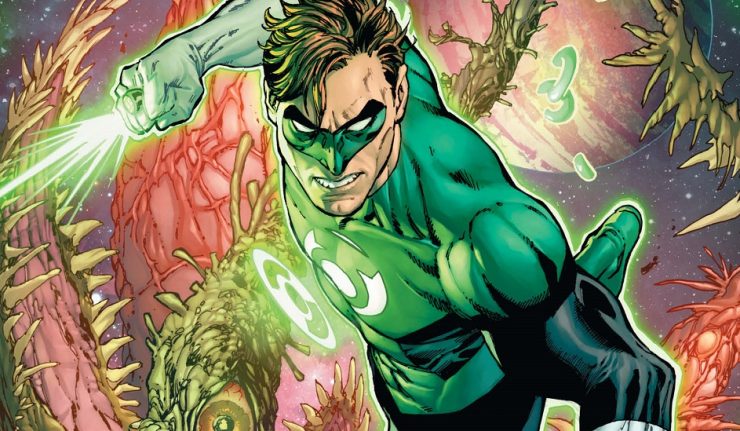 Hal Jordan is being treated on a medical space ship after his battle with Hyperwoman last issue.  There’s no rest and recuperation for him, though as the ship is attacked by the Qwa-Man!  And it leaves Hal Jordan dead…again?

This is the best issue of Season Two, hands down.  Not only does it finally expand the scope with the reappearance of the Qwa-Man (looking quite a bit like Deathlok), but it also features a humorous character, Crassius Qwipe-6, fist seen in The Green Lantern #4.  Although, he/she’s not all fun and games!  The shocking twist with Crassius at the end of the issue is not only funny, but may be a nod to his/her cartoon origins.  Crassius certainly looks like he/she could be based on Lippy the Lion.  This is one of those instances where the research required for some Grant Morrison books pays off.

Bringing the Qwa-Man back in, ties Season Two directly to Season One.  Crassius showing up does the same.  It feels like the big picture is finally starting to coalesce.  Perhaps, it’s not obvious where it’s all headed, but these elements contribute to the overall feel of The Green Lantern: Season Two # 6.  Morrison also does a nice job using the nurse character Leylo Olaqua as a way in for the reader.  He reveals so much about her quickly and efficiently, in some ways it’s her issue.  Did she and Hal really date?

It’s not often that the hero fails to save the day and yet it still feels like it’s all part of the plan.  Hal gets some nice character moments as he doesn’t let impending micro-surgery and much needed rest prevent him from finding a Green Lantern ring (he doesn’t have his) and facing the Qwa-Man and his Qrew.  As the medical ship falls into the nearest planet, Hal finds himself in front of the Guardians of the Universe.  And well, he’s dead…again.  Interestingly, he appears to wearing the green hooded shroud reminiscent of his time as the Spectre.  This is the crazy wackiness that Morrison did so well in Season One.

Not everyone wants to search the internet for information on characters…

Morrison gets things together with The Green Lantern: Season Two #6 in a big way.  Instead of feeling like an unconnected tale of Hal Jordan, Space Cop, this issue brings back the scope that worked so well in Season One.  Furthermore, Morrison references the past with the notion of the dead Hal Jordan and perhaps his turn as the Spectre as well.  There’s a lot to enjoy!